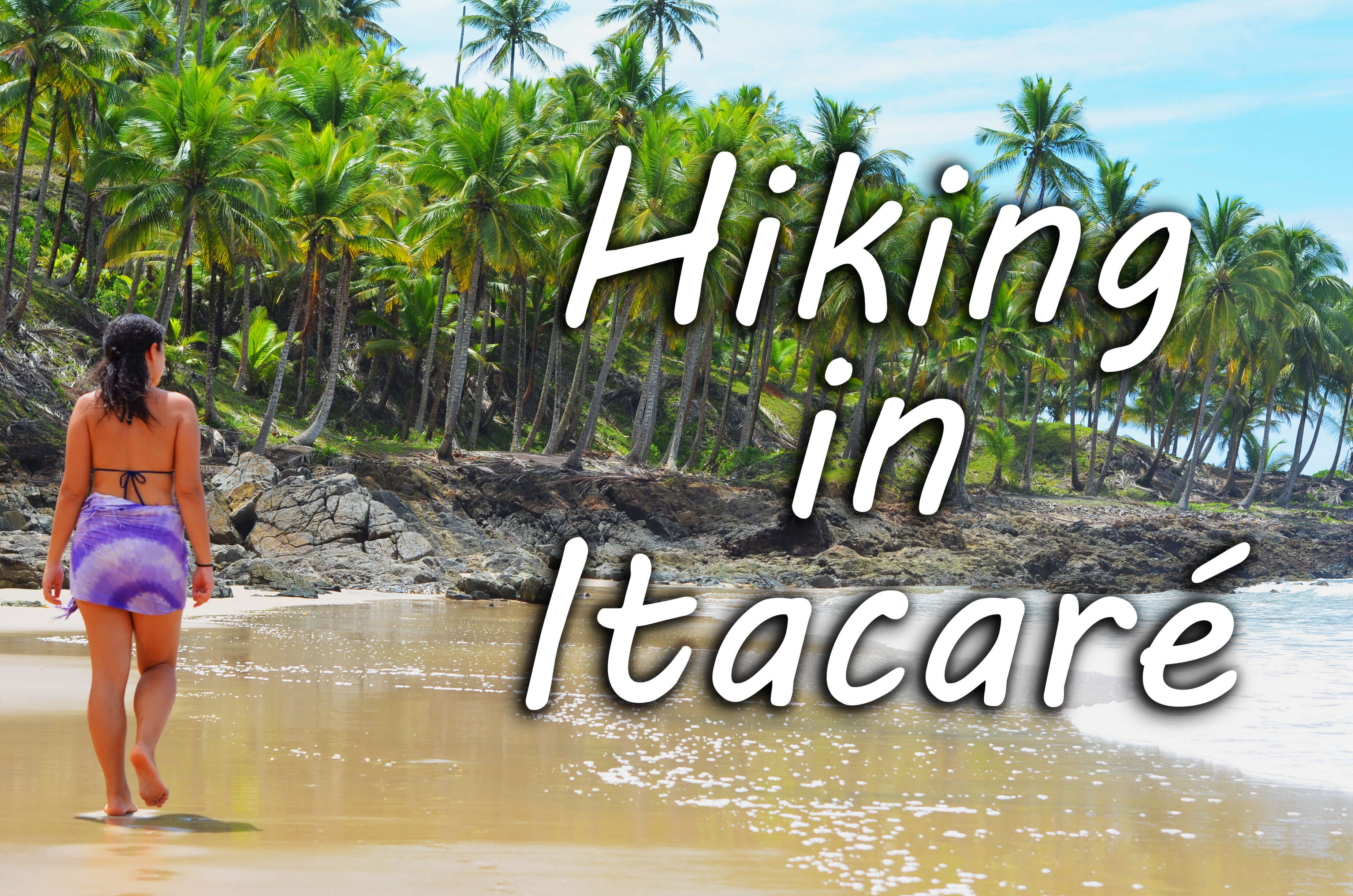 It’s an unusual feeling indeed: Hiking in Itacaré, and then all of a sudden your girlfriend starts screaming in distress, waving her arms like a lunatic, and yet you have no idea what to do, or how to help her.

In times like these, it’s best to just keep filming.

It turns out she had bees burrowing deep into her hair, and possibly into her brain if left unchecked, but she’d made a grave error. My Portuguese was certainly improving as the days and weeks passed, yet I was still quite unfamiliar with the language necessary to describe bees attempting to drill into one’s head.

Things certainly escalated quite quickly. The day had started off at a much more sedate pace. So sedate in fact that we thought we’d be royally duped by the friendly tour guide.

We had the choice of 8 different day trips (We used IMDM Turismo). Considering we were only staying in Itacaré for 3 nights/2 days, it seemed wise to take a guided trip to make sure we at least hit at least some of the epic destinations.

A few were written off immediately – Spa resort? No thank you. A whirlwind boat tour of 4 beaches? Not today cheers.

We eventually settled on hiking in Itacaré – a beach and waterfall combo, with the chance to check out some mangroves. I’m an absolute sucker for a waterfall, and am certainly partial to a tropical beach. My knowledge of mangroves is limited, but from what I knew they looked pretty creepy/awesome… so we Whatsapp’d the guide and scheduled our pick-up for 9:30 the next morning.

The first sign of trouble came around 8:30 the next morning, as we nipped out for a quick breakfast.
Far out to sea were a fierce set of clouds, already noticeably dumping their load.

“What do we do if it rains? Will it be cancelled?”
“Rain? Oh no. It’s just a passing shower”.
This Whatsapp exchange with our guide DID NOT fill me with confidence.

This scepticism was well rewarded when, minutes after the bus dropping us off and being told we had a 20-minute hike to the beach, it indeed started to throw it down. The ‘passing shower’ was enough to drown our inappropriately dressed selves, and have us wrapping all electronics in whatever spare clothing we possessed. Admittedly, the shower passed just as we hit the beach, but the mood had already been a little soured. 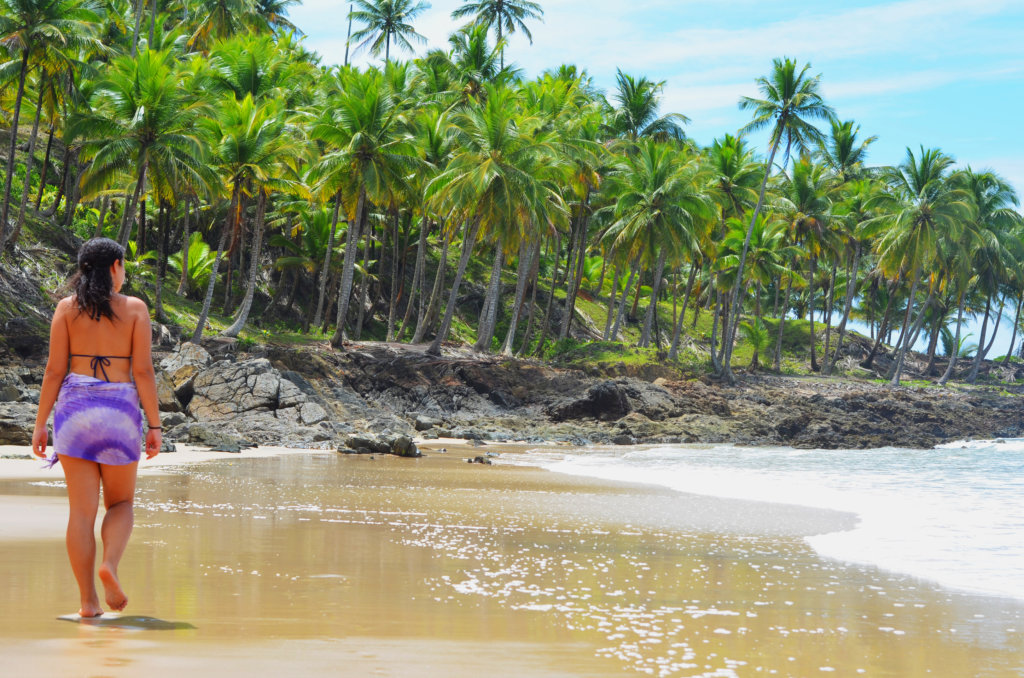 Jeribucaçu beach was indeed pretty… but certainly not the “muito muito linda” as our guide had pitched. It was tranquil, with some decent photographic opportunities… but what it also housed was a local restaurant with somewhat expensive prices.

When he announced that we’d spend the next 3 hours here (and then proceeded to run off and play beach football with his restaurant buddies), I’ll hold my hands up and admit that I thought we’d been shafted.

3 hours in the blistering heat, with the only respite being his mate’s seafood restaurant? I smell something fishy.
Yes, the food was delicious, and the beer frosty and refreshing… but we all let out a sigh of relief when he finally announced we’d be setting off for the waterfall.

That sigh was retracted by a few when the fine detail of a 50-minute hike to said waterfall was introduced, but the excitement of new experiences prevailed.

And then shizzle got real!

We weren’t just hiking through your standard trail… no, no, no! We were wading through freaking mangroves! Thigh deep through potentially crab infested swamp mud!

Now THAT’S what I call a day out! Hiking in Itacaré was totally the right choice!

360 camera in one hand, flip-flops in the other… it was time to get filthy!

Timeout
It’s right here that I’ll give you all a lesson in videography, free of charge! Normally I’d charge you for parting with my hard-earned knowledge… but this little nugget of wisdom is a gift from me to you:

Every camera has its own settings, quirks and eccentricities, and 360 cameras are no exception. I’m currently travelling with the Xiaomi Mi Sphere (an awesome deal at only £205.32), and Ricoh Theta V (£339.99). They’ve each got their own strengths and weaknesses, but they’re both awesome.

With plenty of time to kill at the beach, I started experimenting with the new shooting mode for the Xiaomi – Bullet Time. It’s effectively a Matrix-style effect with the camera spinning around your head. It’s a tad gimmicky, but I had time to play.

As you can see from the results, you need more than a bit of string to become The Chosen One. You also need to remember that the Xiaomi Mi Sphere camera saves whatever camera mode you were last in, so when you hit the mangroves hoping to create some cinematic eye-candy… you actually just get 50 minutes of exquisite ankle shots.

I was super annoyed with myself when I finally connected the camera to the phone to admire my handiwork. But… easy come, easy go. It was certainly a lesson learnt.

And now back to hiking in Itacaré!

Watching documentaries on mangroves (and the beasts that lurk within), I imagined I’d be a little more apprehensive about sticking my bare feet into the unknown… but not so!

Our guide was knowledgeable, and although I couldn’t understand everything I still picked up lots of interesting facts. If a crab bites you, don’t fight it and pull away. That only enrages the sand dwellers. Instead, relax. It’s all a waiting game… a blinking contest if you will (if only the decapods had eyelids!). Just sit and wait until they realise you’re not actually a threat, then they’ll happily release you, apologising all the while for the embarrassing misunderstanding.

Armed with this knowledge, I waded with gay abandon.

We hit the mangroves at just the right time, as the water at its highest was only 60cm deep (for me at 180cm tall, fine. For others more vertically challenged it was a little more uncomfortable). We left the mangrove trail after around 15 minutes and it turned into your standard tropical jungle hike – hot, humid and full of brain drilling bees.

My girlfriend, Carolina, has a range of dance moves, with some modelled after the celebratory dance performed by Donkey Kong in the SNES classic, Donkey Kong Country.

So when she started doing a similar dance during the jungle hike, I just presumed she was happy with her hiking performance, was enjoying the day, and felt a sudden impulse to celebrate these emotions.

I soon found out we’d wandered into a swarm of bees whose unusual reaction was not to sting, but to burrow and entangle themselves into any exposed hair. What their ultimate goal was is still a mystery, but it certainly unsettled the longer haired members of our group. Much squealing and waving of hands ensued.

Once I understood the gravity of the situation I lept into action, wrestling the little devils out of her curly hair, but not before receiving some filthy looks for making sure my camera was first safely put away back in its protective sleeve.

The rest of the trek was somewhat subdued, although my vocabulary grew extensively due to the multitude of curse words being thrown around. Hiking in Itacaré was proving to be educational too!

All was forgotten once we emerged from the jungle, and wrapped our eyes around Cachoeira da Usina!

As far as waterfalls go, it’s very easy on the eye. Wide, powerful, a huge basin of water at the base… tick, tick, tick!

And so in we jumped!

Ever since my adventures in Ibitipoca state park (Minas Gerais, Brazil) last year, I’ve developed a desire to climb and leap from any and every waterfall. This was certainly no exception.

360 camera in hand (and now with all settings corrected) I swam against the raging water and up onto the slippery rocks. One-handed waterfall climbing is a tricky business, yet I prevailed!

There’s no feeling quite like resting at the base of a waterfall – being battered by the cascading water, clinging on for dear life to avoid being dashed onto the rocks below, grimacing from the constant stream of rabbit punches raining down from above, and yet all the while feeling truly fresh, pure and cleansed.

All too soon it was time to jump into the basin and swim back to shore… but it couldn’t be THAT simple, right?

Before launching my body into the pool below I was advised by a fellow waterfall dweller that the pool contained a rock or two, and not to dive in headfirst.

Diving in knee first was equally unadvised, but at least I came out better of the two. I looked much cooler with a bloodied leg than my new friend who smashed his tailbone after jumping in.

A gentle 15-minute hike back (after sampling some Jackfruit – not the highlight of my life), and we were finally back in civilization.

It was a day filled with emotions and experiences that shall not soon be forgotten. If you ever find yourself in this neck of the woods then I would, without hesitation, advise you to kick off your flip-flops and try hiking in Itacaré! You won’t be disappointed.

So what do you think? Does hiking in Itacaré sound like your idea of fun, or a living hell? Drop a comment below and let me know what you think!

4 thoughts on “Hiking in Itacaré (Beware of the bees)”