The pilfering of my wallet had led to a distinct shortage of funds. My replacement card had arrived within 7 days yet my pin was still somewhere out in the ether. I was operating on a ‘restricted’ diet… but nothing unusual there as my calorie intake had been somewhat erratic for the last few months.

After a week of extreme portion control I remembered that a PIN wasn’t required to use the wonderful services of http://www.azimo.com . It’s a money transfer service, something akin to Western Union… except that in certain countries with duel economies, like Argentina, they give a MUCH better rate than standard banks or even the local dollar changing “cambio cambio cambio” blokes.

So I transfered some cash to myself for collection… the collection point being a little booth in a Coto Supermarket, not too far from the hostel. I’d collected from there once before and was more than confident in my ability to locate it again……… hahaha… you fool!

The address of the place is on Avenido Rivadavia… the same avenue as my hostel… just a straight line, 16 blocks… simples!

The confirmation email took its sweet time to arrive (2 hours… not exactly unreasonable), yet that put me perilously close to the 17:00 closing time. It was now 16:40… roughly a 15 minute walk… I could totally make it!

Clad only in short shorts (Editors note: great forethought dufus!) I performed a superman-esque wardrobe switch. On came longer shorts, a comfortable shirt and my decaying running shoes… that is all.

It’s only when you travel for any length of time that you realize how much of a luxery underwear is. The purpose behind it appears to be shrouded in myth and conjecture too. To mop up secretions, to prevent chafe, to provide support to the dangly bits… all reasonable,  yet none so convincing as to deter my  daily commando dalliances.

For my 14 month escapade I carried 3 items of undergarments.  If they received daily usage then they would be in no better state than my crumbling feet……. no. My crotch mopping, chafe protecting gonad supports were preserved for special occasions… sunday best as’t were.

Socks are a different kettle of fish,  but as I carry similar quantities of those, they too got sidelined.

I was off… power walking the streets… heading towards cash and a good meal!

That was the plan.

Who needs a map for a straight line journey??? Not Fray! A map would have only weighed me down!  I needed to be fleet of foot and swift of heel to reach the pot of Pesos at the end of the rainbow!

Pearl Jam in my ears I deftly manoeuvred the busy streets, like a whisp of cloud racing across the packed pavements. 1 block… 3 blocks… I was unstoppable!

……..until I reached the end of the road!

I have a big map… but not even my map depicts the end of Avenido Rivadavia! In my excitement to lay my grubby mits on the cash, and openly singing along to my Pearl Jam megamix, I appeared to have missed my destination… by a country f##king mile! (Over 20 blocks it would later transpire).

It was at this time that 2 things began to sink in.
Number 1: It was now 17:20…… Doh!
Number 2: It dawned on me that I had never actually collected from this particular destination… as the last time I tried I discovered the kiosk was decorated with unattractive wooden planks… covering the entire kiosk…. almost giving the impression that it was disused, and had been since the pre-cambian days.

With this dawning came the remembering of the jolly little wander I’d undertaken to discover another outlet.

I had 2 options… swallow my pride and retreat the way I’d come……. HAHAHAHAHA!!! Never gonna happen!  Option 2 was to find the other outlet! Yes, it may be closed. Yes, I would return without money and food… but at least I could return with my head held high! A voyager, lost at sea who battles against the odds and returns (semi)victorious!

It was also around this time that my wardrobe choice started to become an issue.

Why I didn’t burn and replace all my items of torturous footwear when I had the chance in Chile… that will forever remain a mystery. I’d probably derive more enjoyment wearing socks made of broken glass!

The absence of any socks appeared to be accelerating the foot mutilation. I was distinctly aware that 2 juicy blisters had formed on my heels, and the dawning of a few more on the pads.

Turn around and retreat? NEVERRRR!

Parts of Buenos are real pretty, and it was a pleasure to blindly wander down the tree lined streets. Other parts are grim indeed and the pleasure was not so intense.

My strategy for becoming un-lost? Buenos Aires was very handily built on a grid system, so my plan was fiendish in its simplicity… the old left right left right strategy! My thinking being that I’d eventually stumble across a street name I recognised, then I’d just follow that back to civilization… even if I was now over 30 blocks from home!

Did it work? Of course it did! Did I get my cash? Of course I didn’t! Was I in crippling pain after wandering for close to 60 blocks in shoes that are rapidly dying, yet not without waging a terrible and bloody war with my feet? Hell yeah! 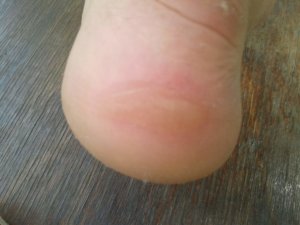 Update: Who knew maps were handy for finding things??? The guy who invented them deserves a medal! Bish bash bosh! 25 minutes round trip and I returned laden with supplies! Maps….. geez, what will they think of next?