To say I knew what I was letting myself in for when taking on this gig in Costa Rica would hold some truth, but only because I’m a stubborn pig… a stubborn pig who likes to follow through his actions, regardless of how ridiculous they may sound/feel/actually be.  I believe that everything happens for a reason, and that includes the choices we make.  So when I emailed this farm and expressed my desire to come and volunteer here I knew that I would be amongst nature, battling the elements, away from the big city… and that sounded delightful.

What I didn’t initially know was that after two weeks I would be completely alone… completely… alone.  I was made aware of this fact a few weeks before I left Venezuela, but by then I’d already committed to the farm in my mind… and most people who know me know that once that happens it’s pretty much a done deal.

When informed of the potential for 6 weeks of solitude my mind instantly flew to tales of Chris McCandless from Jon Krakauer’s epic ‘Into The Wild’….. a book/film/soundtrack that I have always been madly in love with.  (If you’ve not read/watched/listened to it I will be most offended if you don’t buy them instantly after reading this).  The idea of going away, far away, and spending time with myself and myself alone has always appealed to me.  Now I finally had the opportunity to actually do it!!! And in the freakin rainforest of Costa Rica! AWESOME!!!

There are days where I think I’m losing my mind… going loco, cuckoo, of unsound mind… however you care to phrase it.

Don’t get me wrong, there are people around… but driving 10 miles to jabber to a shopkeeper for just a few minutes of social respite definitely smacks of being wacko!

So I began to research isolationism and it’s possible negative effects.  I found this gem:

Does being isolated too long cause insanity?

Yes. The mind begins to deteriorate and the isolated person spends a lot of time dwelling on the past- on the glory days and the mistakes. The power of analysis becomes overwhelming. Since there is nothing to look forward to the mind slips farther and farther into the recesses of the mind’s past memories. The person remembers things they thought they had long forgotten. Good and bad memories flood the mind. Every small action and observation either acquire deeper meaning as they are tied to the past, or loses significance. The person becomes a shell of a human. And the existence no longer means anything.”

WOW!!!  Wish I’d read THAT before I boarded the plane!!!  Jon never mentioned any of THAT in his joyful little tale!

So is it true? And to answer that I’ll introduce you to some of major players in this episode. 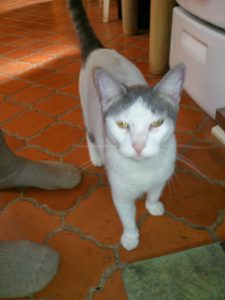 I’m not a cat guy… never have been, never will be.  Their existence baffles me.  The Egyptians loved them ( Initially praised for controlling vermin… and to be fair, give Paloma a cockroach and she’ll stomp a mudhole in his ass, yet she runs a mile from a toad… USELESS!!!).

Paloma isn’t like most other cats I’ve had the displeasure of meeting. Paloma doesn’t purr (or drill) for food and then abandon you… no, no, no! Paloma is homicidal.  She likes to wait until you’ve committed to a stationary action… say pouring the kettle to make a nice cup of green tea. Then she’ll stealthily creep up behind you and lay herself millimeters away from your heals.  You can imagine the hilarity that ensues when you turn with said scorchio cup of tea, trip on said nutjob and almost faceplant into said cuppa! No apology… no “Oh sorry, I didn’t know you were making a brew!”……. just a hiss (Why does everything around here keep hissing at me???) and a lightning dash across the room………… until the next time!

So I learnt to anticipate her actions.  If I approach the kitchen I do so with my head on constant swivel.  This vigilance has paid off as I now see her sneaky advances and can shift her away with a gentle sweeping of the foot.

But Mother Nature is a tricksy beast! She instilled in her creations the ability to adapt… and adapt she has.  Now she lies a few feet away.  In my hubris I presumed that I had tamed the creature… (Editors note: Are you a complete moron??? Do you learn nothing???)

So I make my brew… all the while twitching and turning, waiting for the inevitable kamikaze dive for my heels… it never came… so I let my guard down. I pick up my brew and head for the door, past the ‘sleeping’ cat.  Said ‘sleeping’ cat then violently flinches, sending her metre long claws jamming straight into my toes!  My love of green tea prohibits me from showering the twitchy feline in tasty molten goodness so I take the hit.

Other tactics she has employed are biting the toes, hooking her claws into my sock to be pulled around, and startling the other animals so they themselves cause a near scolding outcome.

Is it me? Is she just a sick, twisted individual who likes inflicting suffering? Or does she just dislike green tea? 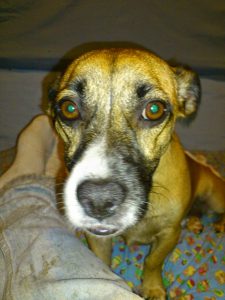 Apparently Sophie had a troubled upbringing. She was rejected by her mother, which has led to her being incredibly neurotic and clingy.  I am a dog person… always have been, always will be… but Sophie is mental.

A better name for Sophie would be Shadow (but that’s already taken… we’ll get to her shortly).  I can’t stand, sit, cough or breath without Sophie feeling the need to get deeply involved in the action.  Her incredibly long nails provide a constant ‘click click click’ whenever I walk around the house.  If I go to the bathroom she’ll follow, curl up outside the door until I’ve done my business, and then follow me on my next journey.  Every morsel I consume is watched with puppy dog eyes (she is super cute) until I either relent and throw a scrap, or encase my heart to stone and say “No!” (usually when it’s a stupendous meal I’ve just cooked… which happens quite a lot!)

Increasingly she has taken to sleeping on me.  Come the evening time when I settle down to read and relax she will launch herself, incredible nails an all, onto my usually under-dressed self (Whoa whoa, back up there!  There’s no naked Tuesdays going on at this Finca! I’m just saying it’s so warm I usually lounge around in shorts! Easy tiger!).  She’s not the most co-ordinated of beasts, so it usually takes a good few rakes of the hooves to ensure a solid grounding.  Being a female she appears to know not the delicacy of the male genitalia, so when she pounces and digs her talons into my crotch I accept it with the same grace as a 3 inch cat claw in the toe… multiplied by a gazillion!

Her other quirk is to hound me (sorry) during exercise.  With a lot of free time on my hands I’ve taken to doing a lot of bodyweight exercises – press-ups, plank, dips etc.  Sophie seems to take great delight in joining me on these sessions and waiting until the time when I am almost fatigued and ready to drop before joining in.  1 final set of press-ups… she’ll come and sniff my feet.  5 more dips… she’ll come nibble at my fingers. 30 seconds more to set my plank PB… she’ll sniff my side.  Oh how we chuckle as my body twitches and convulses after 4 minutes of planking! 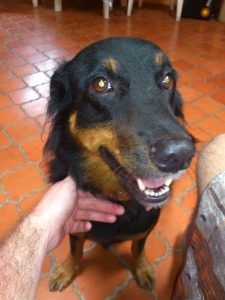 Shadow is perhaps the most worrying of all as she used to be the most sane of the trio.  Shadow has always been the more mature of the three, preferring to watch all the carnage transpire whilst lazing idly on the floor.  She likes a good bark at distant noises, but she’s never craved constant attention, nor demanded excessive amounts of affection.  She likes a good scratch behind the ears, but then who doesn’t?

Recently she’s become quite defensive over me.  When Sophie takes to scraping away at my crotch she will now run over and chase her away.

For one, her chasing away causes Sophie to flinch. As Sophie usually has my groin in a death grip, any form of flinching is not an enjoyable experience!

For two, she’s taken to replacing Sophie’s torment with some of her own as she then leaps up onto my lap…….. and Shadow is a BIG dog! When she pounces it’s not sharp pincers that do the damage… it’s sheer weight and force! Ground and pound!

Her other delightful little quirk is evident when we go for walks in the forest.  I like to take them for a jaunt every morning to stretch their legs, usually down to the river so they can take a dive.  They both seem to enjoy this experience (not Paloma… she’s off watching CSI somewhere, planning her next ingenious hate crime!).  So as we go off into the forest the two canines go bounding about… racing back and forward.  The path is fairly wide, allowing for ample bounding (on their part, not mine… it is early morning after all)… yet every time our good friend Shadow seems to wait for the sections that get narrow and single lane before she takes great delight in thumping past, sometimes sending me sprawling head first into the surrounding flora.  I try and anticipate these little ‘love nudges’, but she’s incredibly good at varying her attacks and leaving them until the very last second before sending me ass over tit.

So I refer back to the initial description of isolation induced insanity:

Would I perceive these actions as anything other than playful, whimsical animalistic actions if I was in a more populated environment? Along with the Toad invasion (see earlier posts), am I over thinking their intentions? Are they just ‘doing their thing’, and it is me that is projecting my madness onto them?

How does one take a step back and analyze when there is nowhere to step back to?

These are all new experiences… and as Krakauer said:

“The core of man’s spirit comes from new experiences.”