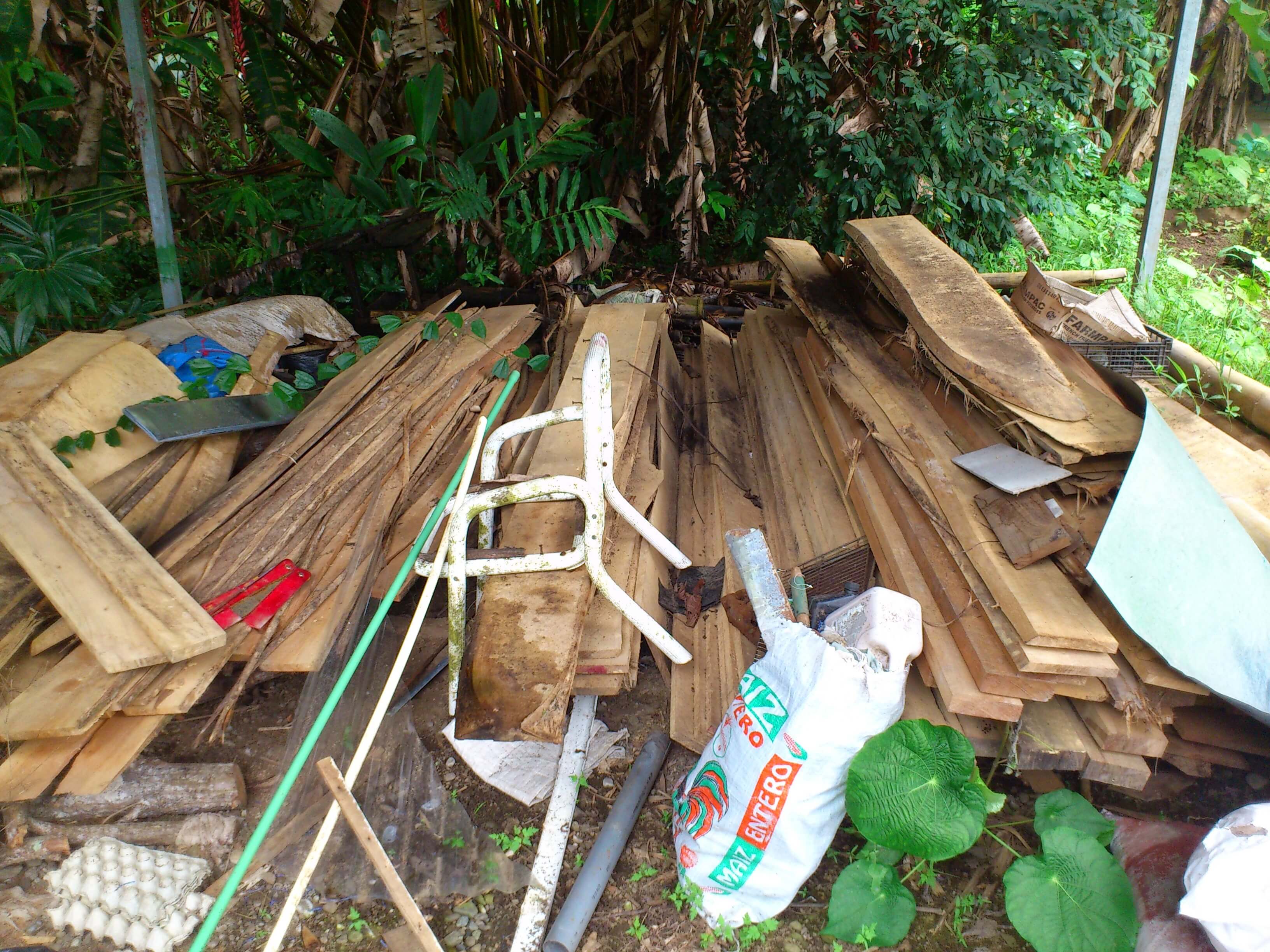 So as my first week in the Costa Rican rainforest draws to a close I sit back and reflect on the hectic week that was. It’s amazing how quickly we humans can adapt (some of us at least) to new and challenging situations. 6 days in and I’ve already fallen into a routine, thinking nothing of donning my plastic boots come the morning and wading off into the jungle to forage for fruit, hack a few branches or paint planks of wood (more on that shortly).

With Yorkshireman Geoff as my guide in the quest for omnigalactic jungle enlightenment I’m slowly learning the ropes. His intimate knowledge of the local flora and fauna, plus how to make an excellent cup of coffee, have proven invaluable in my training thus far.

My first task, handed down from the powers that be, has been to dry-treat a shed full of planks of wood… “Easy! Easy!!” I hear you thuggishly chant… no, no, no!!! 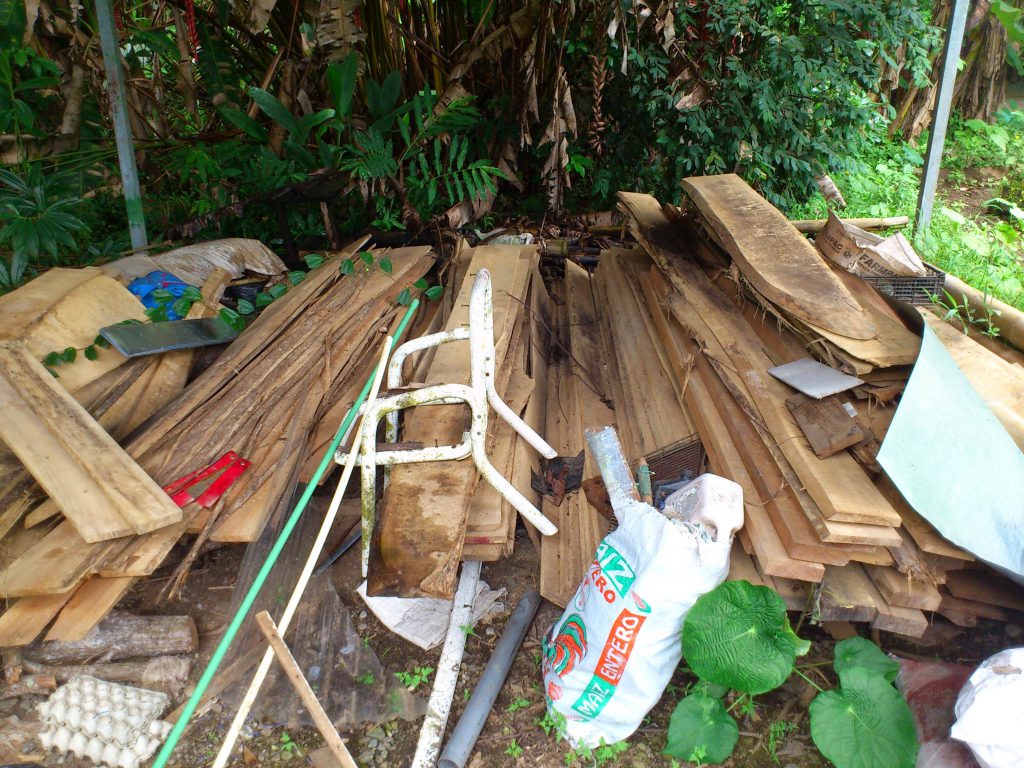 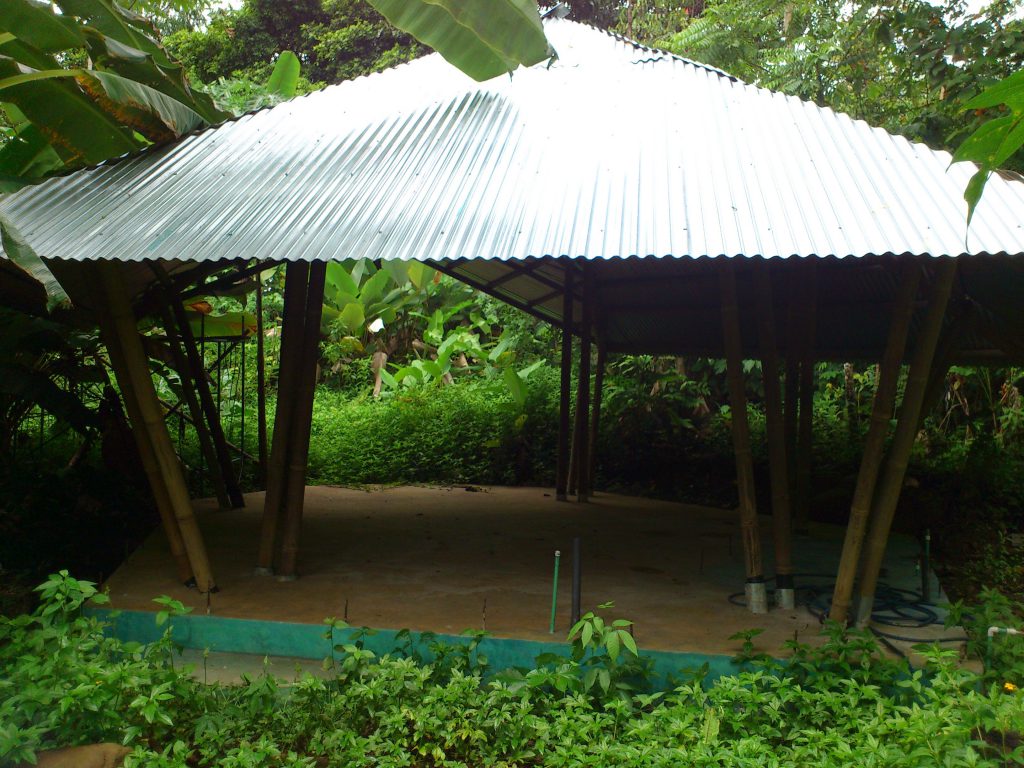 With not enough room to swing a gecko (still not seen one… let alone swing one!) I must first transport said planks 15feet to the sheltered Jungalow… a simple task, if the planks weren’t 7foot long, weigh a considerable amount and I didn’t have to traverse a boulder strewn path.

Not to be deterred I approached the stack to size it up. Being unaccustomed to jungle life I leisurely strolled up in my flipflops… and this is when I was introduced to my first new friend… Mr Biting Ant, and his rather large extended family. He welcomed me with open mandibles, but in his excitement he accidentally closed them with astonishing force… as did his ever swelling number of friends! For a mouth so small their bite packs one hell of a punch! “Thank you for your hospitality Mr Ant, but I really must be going now!” I cheerily yelled in between yelps, curses and multilingual obscenities.

The lesson was quickly learnt: never walk the farm without rubber boots!

So I settled into the routine: lug the planks, paint one side, flip, paint the other, repeat. It could easily become monotonous, had I not had 2 more friends with me, keeping me company every step of the way. The first would be my dear friend Sophie.

A neurotic little dog who never fails to bring a smile to my face as she goes bounding through the forest chasing butterflies, lizards and all manner of other wee beasties she has no hope of catching. She has accompanied me on all my painting excursions, come rain, hail or shine (although during the usual thunderstorms she does have a propensity for wrapping herself around my leg in abject terror… which somewhat hampers my dry treating).

My other companion has yet to reveal themselves, yet they too have joined me for every stroke. Their moral support and encouragement has proven invaluable in the oppressive humidity. Almost without fail, whenever I turn a plank I hear their “Whoop whoop” from up in the canopy… a sign I’ve taken to mean my painting is of the highest standard, and worthy of a double “whoop”! The Whoop Whoop bird is relentless in his praise….. what better friends could I ask for?

So I start work as normal, lug my planks, have my ego stroked by the bird, when who do I bump into? That’s right, my old friend Biting Ant. He kindly waited until I’d picked up 2 huge planks and was navigating the boulder field before making his presence felt. Unbeknownst to me he’d generously organized a biting party… in my glove! I’m so glad I was invited! With the choice of dropping the planks to say hello or staggering on to the Jungalow I chose the latter… poor choice Fray! I think Mr Ant and his buddies may have had a drink or three as the party quickly spilled out of the glove and all up my arm… those crazy ants, they just don’t know when enough is enough! After disposing of the planks I sadly had to reprimand Mr Ant… they were just getting too rowdy and bitey.