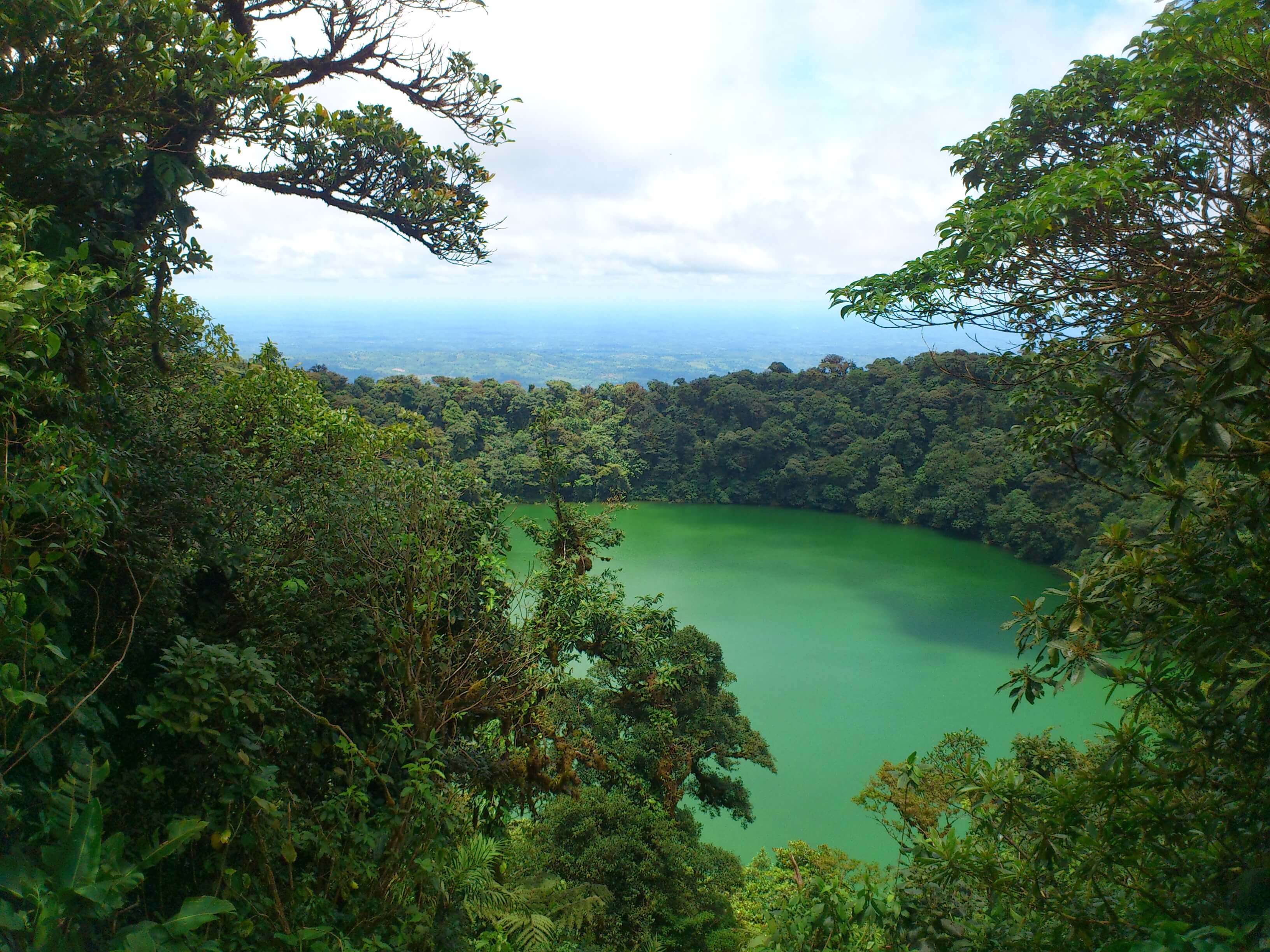 So the first week at the Butterfly Conservatory went really well. Brilliant staff, a great project and stunning scenery.

There’ll be more about the project and the staff involved soon (after I consolidate my ever increasing knowledge).

After a gruelling week of manual graft (I’ve not shifted a loaded wheelbarrow for nearly 10 years!) I needed to relax, unwind, put my feet up… LET’S CLIMB A VOLCANO! 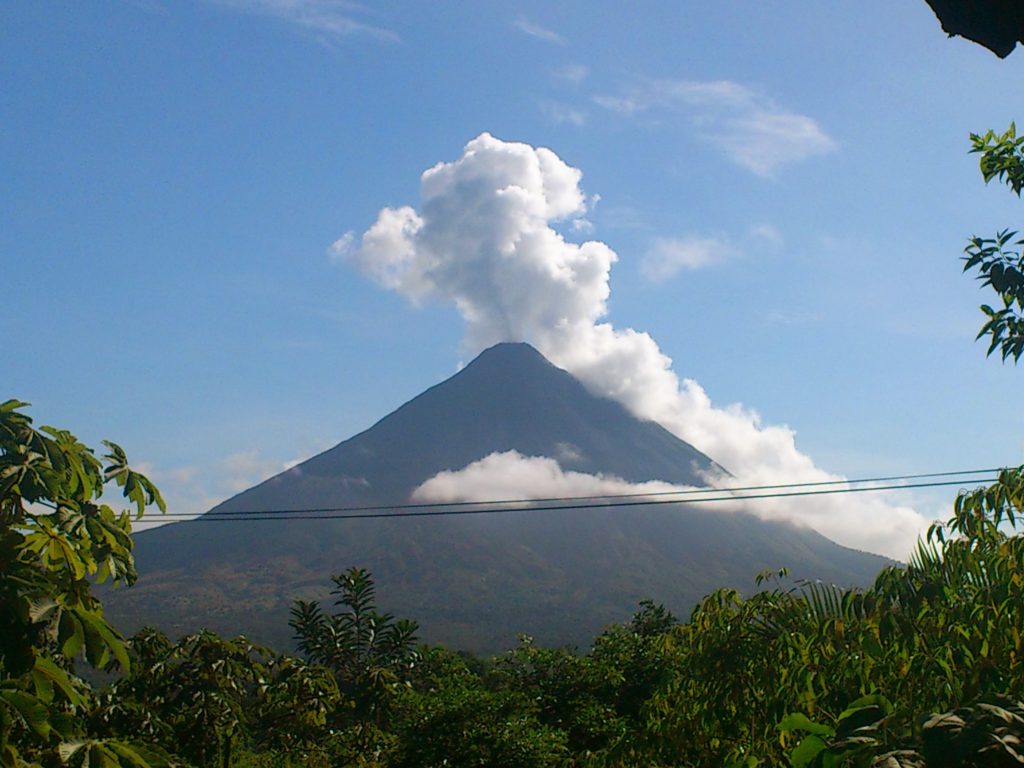 With the juicy Vólcan Arenal (1633m) being off limits due to ‘safety reasons’ I set my sights on his neighbour Cerro Chato (1140m). The guidebooks say 6 hours… I laugh at your 6 hours! A seasoned Alpinist like myself??? HA HA! My legs were primed from work… I was going for a speed ascent!

In a true break from form I actually prepared for this adventure… packed a bag with water, food, basic first aid and everything!!! (They don’t call me Bear Frylls for nothing!)

I set off early, fully aware that the inevitable afternoon thunderstorm would dampen my spirits (see what I did there? Gold!). Hitchhiking to the Observatory Lodge proved no problem whatsoever, and saved me from an additional 5km hike. Once there it was a gentle 2km stroll through rolling hills to the base, and the real challenge.

The ascent proved to be….. challenging. A new speed ascent record would not be set today… the oppressive jungle heat leaching all spring from my step. 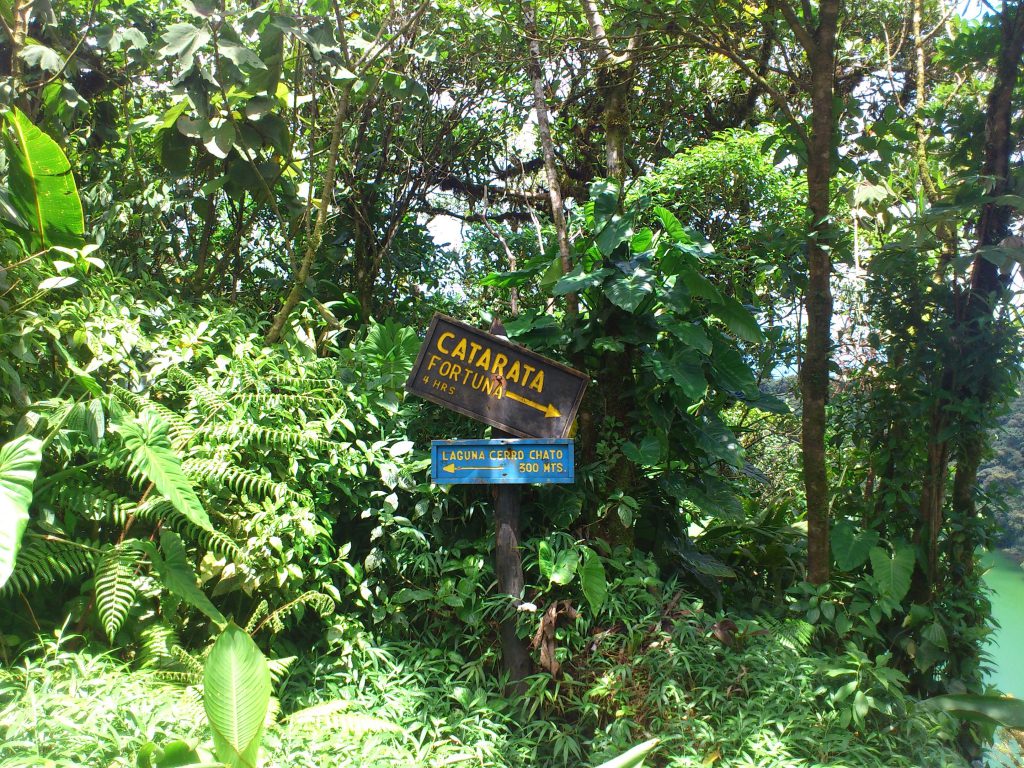 Clearly signposted and with a well trodden route, it lost a bit of the adventure magic. At no point did I feel like an intrepid explorer, braving the virgin volcanic slopes… I was a tourist, clearly doing the token tourist climb.

Not deterred by that, I fell into a steady rhythm and climbed ever higher.

2 hours (and a Jacuzzi full of sweat) later I summited!!! Was it worth it? 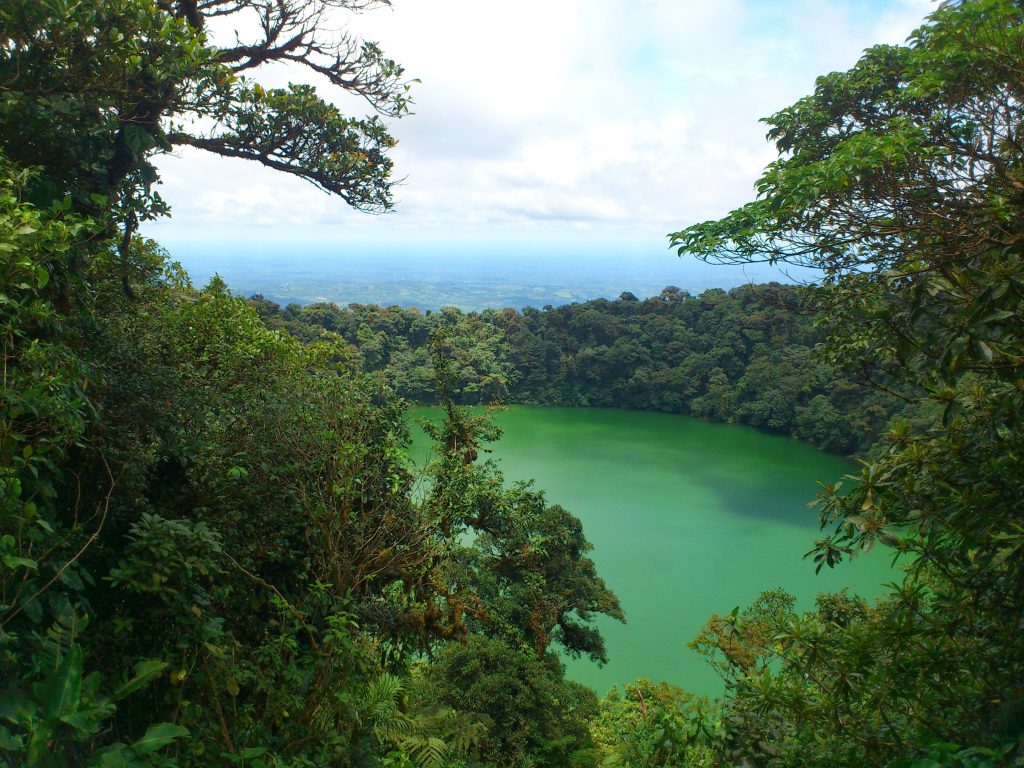 Another 20 minutes down climb and I was in paradise (with 10 gobby American exchange students yelling about how “totally wasted” they’d got the night before and evicted from their hostel……. at least it wasn’t a screaming child)

Disappointed there wasn’t a volcanic water beast on hand to savage the mouthy lightweights, I made my preparations to leave. A quick swim (‘quick’ as I didn’t want the water beast confusing me for a high school hillbilly) and I was off.

Now somewhere in the next 20 minutes I managed to perform a stupendous trick. Whilst retracing my steps along the single path I managed to teleport myself over to the other side of the volcano (another of my party tricks) and began my descent.

It became obvious after about 20 minutes that I was not in Kansas anymore. The jungle suddenly stopped and left a steep, yet incredibly dull, hill to go down. To liven things up a bit I picked up my pace to a gentle jog… no, no, no Fray! A gentle jog down a steep hill quickly (a little quicker than I was entirely comfortable with) became an attempt at the land speed record. As the path gently twisted I found myself running perilously close to the barbed wire fence, but being fleet of foot and nimble of knee I saved myself from a leg removing laceration.

Being fleet of foot and nimble of knee did not however save me when the path dropped 2ft away beneath my feet. My graceful fall was cushioned by the soft and forgiving volcanic rock.

It took around 35 minutes in total to get back down, about 15 of them spent at sphincter quivering speeds.

… and this is where it starts to get surreal.

Not having a solid grasp of the lay of the land I headed past the observatory and began my journey home. I flagged a ride within minutes from a friendly American couple and we chatted about the delightful morning. I knew I’d descended by a different route, yet I had yet to grasp just how far off course it had led me (about 30km).

When I asked if they were going near Castillo they pulled blank faces, saying they were going to Fortuna. Believing my route to simply be in the opposite direction I thanked them and jumped out to try and flag a ride the other way.

It was as I was waving my thumb with gay abandon that the heavens opened. I sought refuge in a tiny little cafe and was greeted by a smily group of Ticos. I remember chatting with them briefly, looking at the menu, having one can of beer with them… and then…….

…… Fast forward 6 hours and I wake up outside a church. How queer!

Phoning my girlfriend and telling her I was in a town 40 miles away speaks volumes for my delirious state. I remember the police arriving, asking me a few questions, then driving me around to various bars (???), where we eventually stopped and I explained what I remembered to a barman who translated it all to them.

They then did what any upstanding police force should do in that situation. They politely informed me that Castillo was too far away, so they would return me to the church where they told me to go back to sleep. They’ve probably both been promoted to Police Commissioners by now… a credit to the force. I later found out they believed me to be under the influence of drugs… Hmmm. I tell them I believe my drink was spiked, and they say I’m under the influence of drugs… CSI, they were not!

I have zero memory of what happened in those 6 hours. It’s not hazy, or cloudy… It’s completely black. I know I’m no spring chicken anymore, but my tolerance can still withstand 1 can.

After checking all my belongings the only thing missing was my bank card, which thankfully is a pre-pay card which means I don’t keep any cash on it until I need something, whereby I just transfer it across from my other account….. A must for all travellers I would say!

So I phoned my boss to let him know where I was, and my girlfriend. It is with tremendous regret that I put her through such stress and worry, but I was still quite spaced out, and most definitely not compos mentis.

So I eventually took the cops advice and snuggled down on the church steps, which were not comfortable in the slightest! Very poorly designed.

I awoke at dawn when the priest unceremoniously banjoed me with the door. Now I don’t know much about the ways of the priestly people, but I’m quite sure compassion is up there on their list of things to do, and not scowl and hit people with doors.

With the Arenal Volcano now in sight I regained my bearings (definitely in Fortuna) and started the long trek back home. I thumbed like a man possessed yet no one found it in their hearts to stop and offer a lift. Km after km I trudged up winding and tortuously steep roads. Drinking from streams (not recommended except in dire circumstances, of which this was one) replaced some of the gallons of sweat I was merrily shedding.

After 20 juicy kilometres (3 hours) I finally flagged a ride from an amazing German (via USA via Zimbabwe) couple. Jorge cheerily regaled me with tales of a new drug from Colombia that wipes out memory. Delightful!

Karma will reward him, as he drove me right to my door, well out of his way, and as I was exiting the car he slipped me $20 to help ‘get me back on my feet’. (all I wanted to do was get OFF my feet after all the hiking I’d done in the last 24hrs, but it didn’t feel appropriate to bring that up).

His act of generosity and kindness is one of the main reasons I love travelling. Although there are many bad people on this planet (and the people who drugged me… Karma will totally kick your ass one day), they are by far outgunned by shining examples of humanity.

So a week after the event, how do I feel? You read time and time again never to accept drinks from strangers, but I presumed that as it was a sealed can I’d be okay. I made a judgement call, and it didn’t pay off. I’ve since been told ‘not to trust Ticos’, but, for me, that’s a horrible way to live your life. I travel so that I meet new people, experience new things, explore new cultures. If I put my guard up completely and don’t speak to anyone or try anything slightly risky I miss out on so many possibilities. Yes, I’ll be more cautious in the future, but within reason.

True, I got stung this time, and I’m lucky to only lose my card and not my kidneys (or my life), but that’s not going to destroy my faith in humanity. There are many amazing people out there… and you have to go looking to find them.