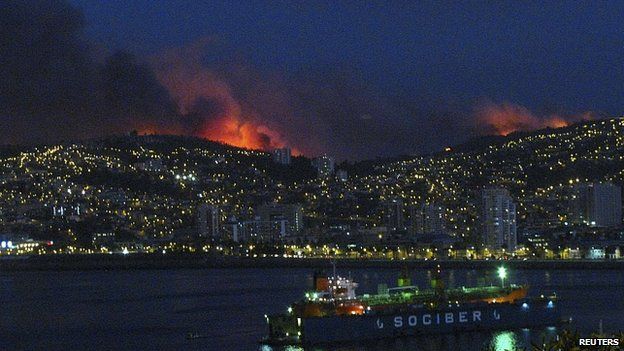 “A picture is worth a thousand words”

Valparaiso was silenced on Saturday………

The beauty and magic that I documented in Street art… Valparaiso style! has been erased in a fire that is being described as “the worst ever to hit the city of Valparaiso”.  At least 12 dead and 11000 left homeless as a massive fire ravaged the city, driven on by strong winds and fuelled by the cramped, wooden houses that were jammed in to every available crevice in the city.

I’m not there now, so I can only go off official reports… which are sketchy at best.  I’m not sure if all the artwork has been destroyed, or if they were able to somehow contain the flames before they hit downtown… but after spending around 10 days walking the streets and exploring those endless winding alleyways I can’t imagine how they could possibly contain it.  The valley floor featured a few squares and open spaces, but the surrounding hillsides were jammed to the rafters!  Any space that could be filled with something barely resembling a habitation was.  Wooden huts that looked like they wouldn’t withstand a decent sneeze filled every orifice of the city.

Yet that description doesn’t paint the full picture (What is left if we can’t laugh?).  The above description conjures up images of a squalid fetid hole, seething with filth and decay… and yet Valparaiso was anything but that.

If my camera hadn’t been ‘liberated’ by a greedy fellow I could have shared photos of the churches, the docks, the sweeping waterline and the stunning views from up high.  All these, together with the breathtaking artwork on every available surface (great or small) gave Valparaiso a vibrancy, an energy… a beautiful, genuine character.

True, I took a good beating there.  True, my phone and wallet were commandeered by a nefarious duo.  True, that pummelling set in motion a chain of events which would stretch my fragile emotional state to previously undiscovered measurements of ‘thin’… yet those were the actions of stupid men.  I still have a lot of love for the city, and I felt genuinely devastated when I heard the news.  Although I met very few locals, my heart bleeds for the thousands displaced by the fire.  They didn’t have much to begin with… I just hope the government comes through with the reported 500 million Chilean pesos in aid money.

Unfortunately I didn’t meet many Chilean folk, but if they’re anything like the rest of their Latino brothers and sisters they they’re made of tough stuff.  They will endure… they will rebuild… and new, fresh artwork will spring up to once again provide a feast for the ocular orbits!  Of this I have no doubt.

If anyone has any further information please leave a comment.