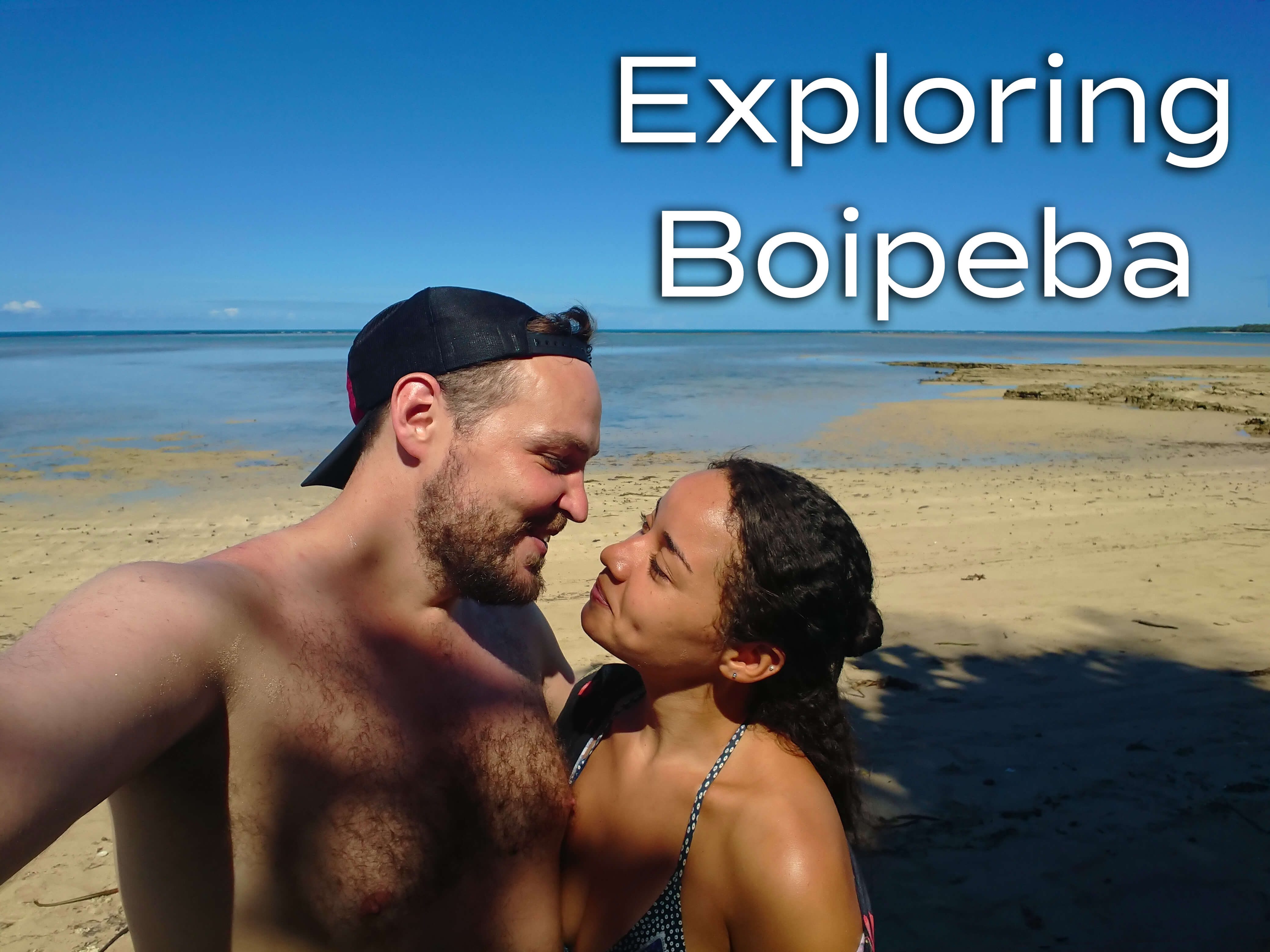 Picture the scene: It’s 03:00 in the morning, pitch black and you’re lay in bed listening to the sounds of nature outside. You have the woman you love sleeping on one arm and a surprisingly moist frog resting on your face. Welcome to Boipeba!

Boipeba is one of the islands of the Tinharé archipelago, in the county of Cairu, in the south of the state of Bahia. Located around 100km north of Itacare, Ilha de Boipeba is an absolute dream! Sun? Check. Paradise beaches? Check. Reefs containing awesome marine life? Marshes and mangroves? Unique protected ecosystems and awesome ecotourism (it’s recognized by UNESCO as a Biosphere Reserve and as a World Heritage Site)? Check! 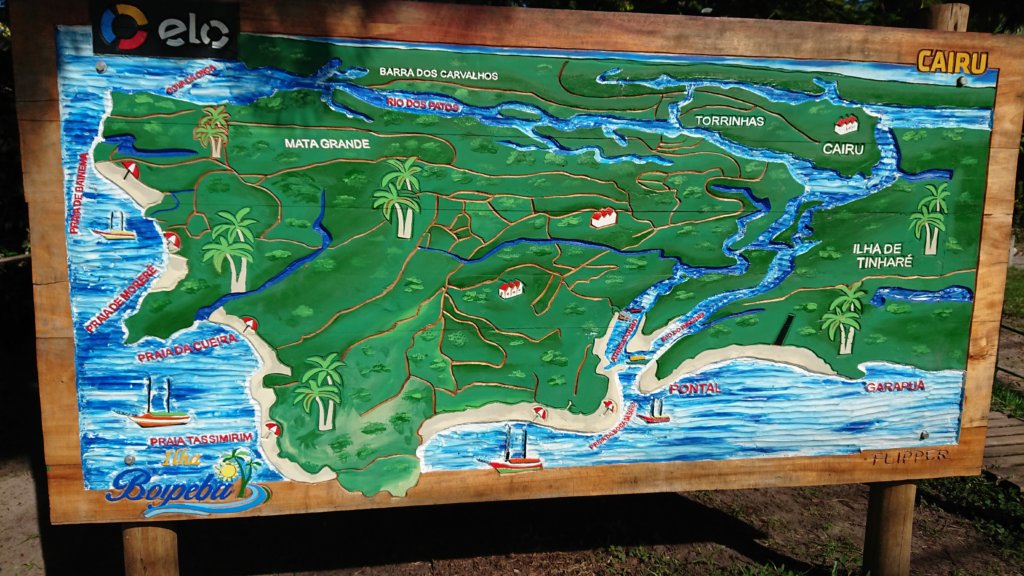 It gets its name from an old Tupy Indian word meaning Flat Snake – mboi pewa. Thankfully, we didn’t see any flat snakes on our travels, but I’m sure there’s one or two on the island (although the name Flat Snake actually refers to a type of sea turtle… but I’m not going to argue with the Tupy).

The journey north from Itacare is a bit of mission, as you need to take a 2-hour bus to Valença (R$60), and then a speedboat to Boipeba (R$88), but it’s worth every minute.

We were once again using Airbnb (R$89,97). Our host was called Fernando Chocolate… there was never an option to stay anywhere else. Carolina was sold! It turns out it wasn’t just a coincidence. He did actually make his own local chocolate products, and even gave us a tub of his cocoa beans (which were used to make many a fine Brigadeiro afterwards).

The first thing you realise is the silence. Once the roar of the speedboats has died down, there’s nothing. With no cars allowed on the island it’s serviced by horse and cart, the occasional tractor and for the longer journies, you can take a quad bike taxi.

We only had a few days, but glorious weather, so our first port of call was Moreré beach. If you’re looking for tropical paradise without all the pesky tourists, head to Moreré in April.

To get there you can either wait for a tractor (I can’t imagine how long that would take, the speed they move), or you can take a casual stroll through the sandy trails and take a quad bike (R$20). The ride was SO much fun! Holding on for dear life as we flew through the dunes and dusty streets!

As Carolina had demonstrated in Itacare, she has natural balance. To watch her on the quad, you’d think we were driving over glass. Myself? I was more like riding a bucking bronco! White knuckles, sweat pouring down my face and a black and blue ass from slamming up and down into the seat.

Anyhow… as we hopped off our quadbike and made our way down to the beach, it was pretty clear we were in heaven. Over 300m long, and you could count the other people on 1 hand! 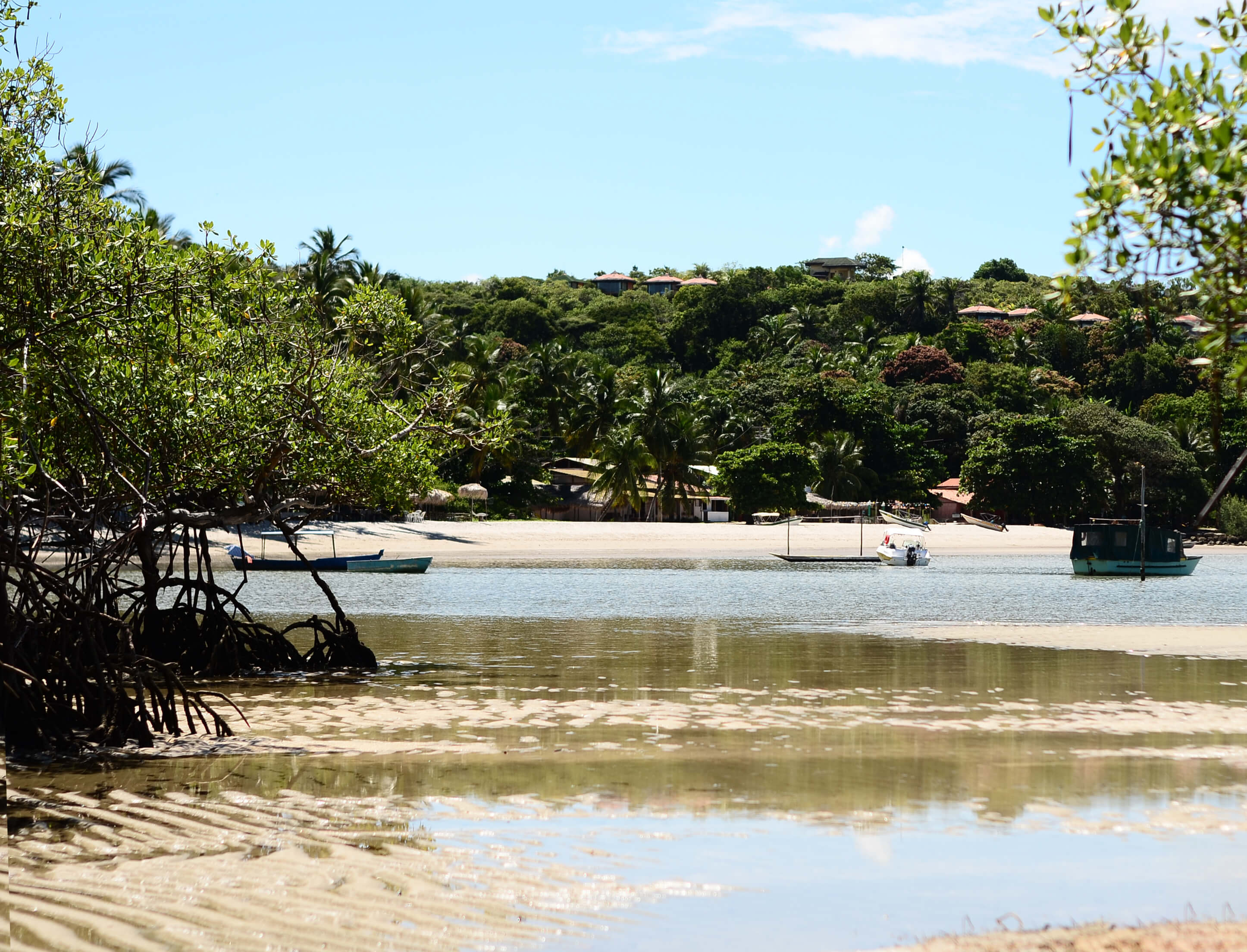 On the right-hand side you’ll find some mangroves, plenty of crabs and a fascinating variety of birds. In the middle, you can walk out for maybe one hundred meters before the water gets above knee high. Lush warm water, blissfully soft sand between your toes… not a shark, jellyfish or any kind of nasty in sight. If you look up tranquillity in the dictionary, you’ll find Moreré beach. 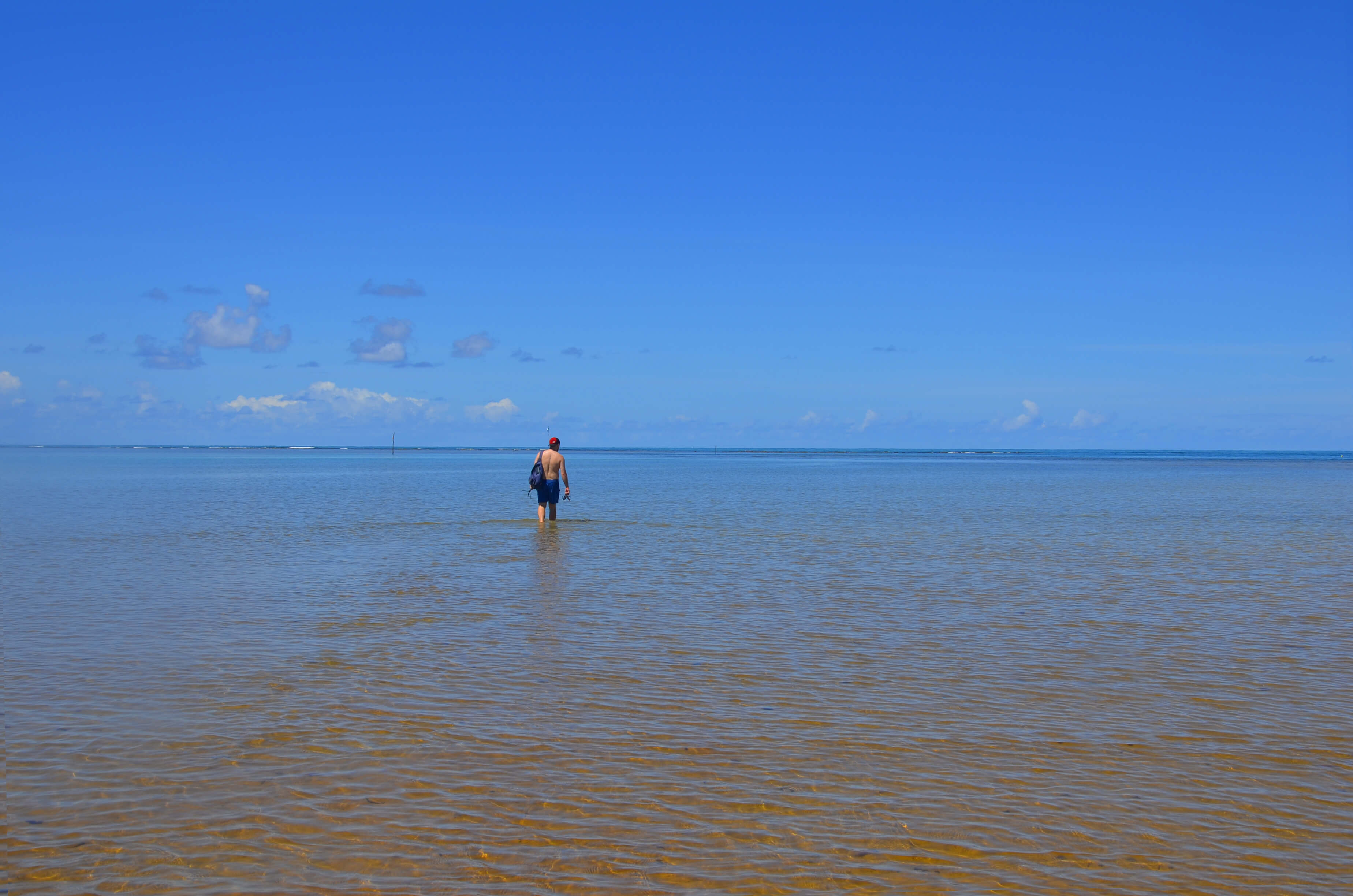 If you’re after high-octane, adrenaline pumping excitement, you’re probably best off looking elsewhere. If you just want to 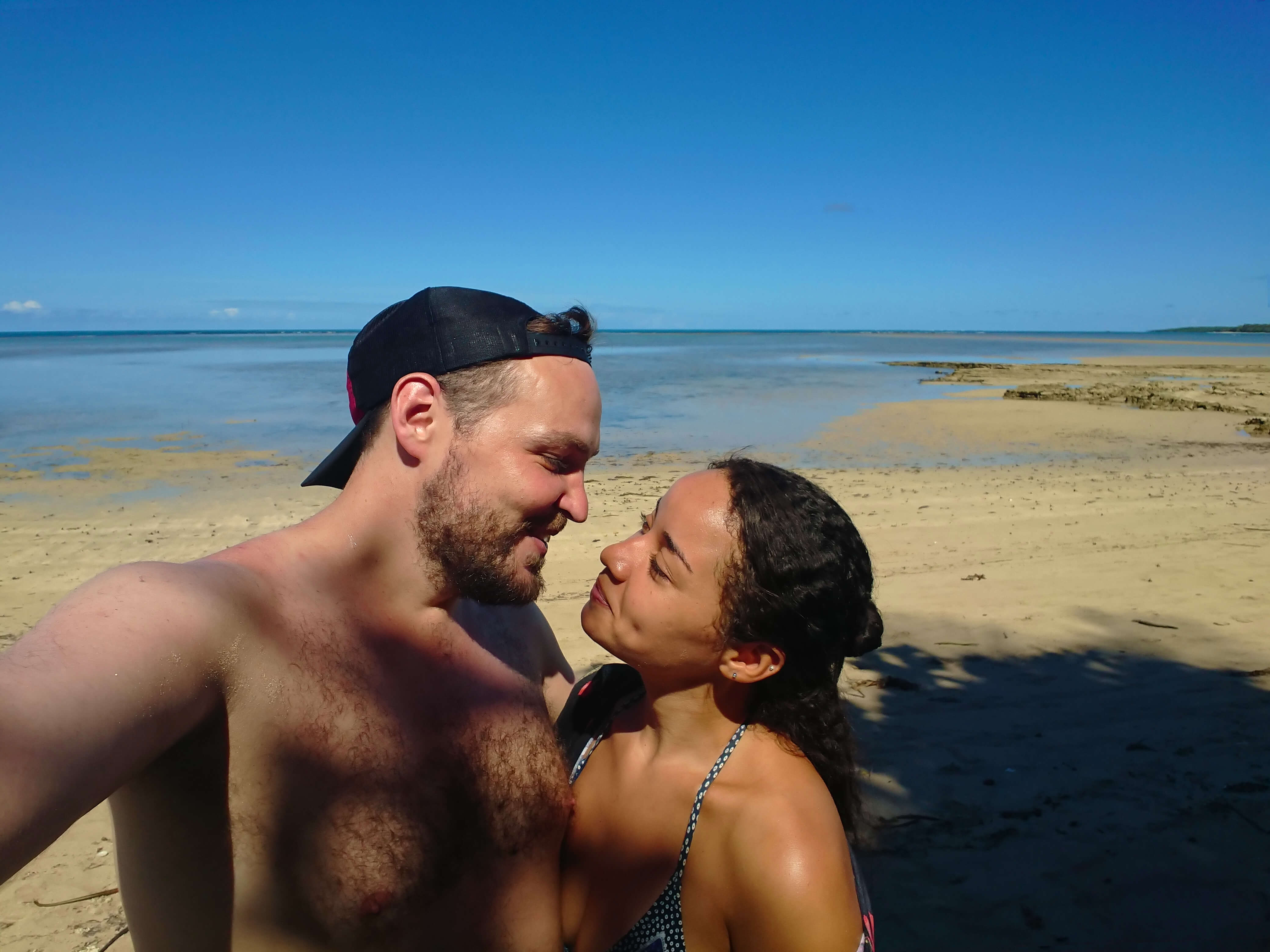 The town square features a few restaurants, tour guide shops and supermarkets, so you can live as lavishly or cheaply as you wish. This is also where you can arrange boat tours around the island, and to the other nearby pockets of paradise (Ilha do Sapino, Goio, Tremembe Waterfall and Pedra Furada Island).

We opted for a meal out one night, to celebrate being in such a magical land. 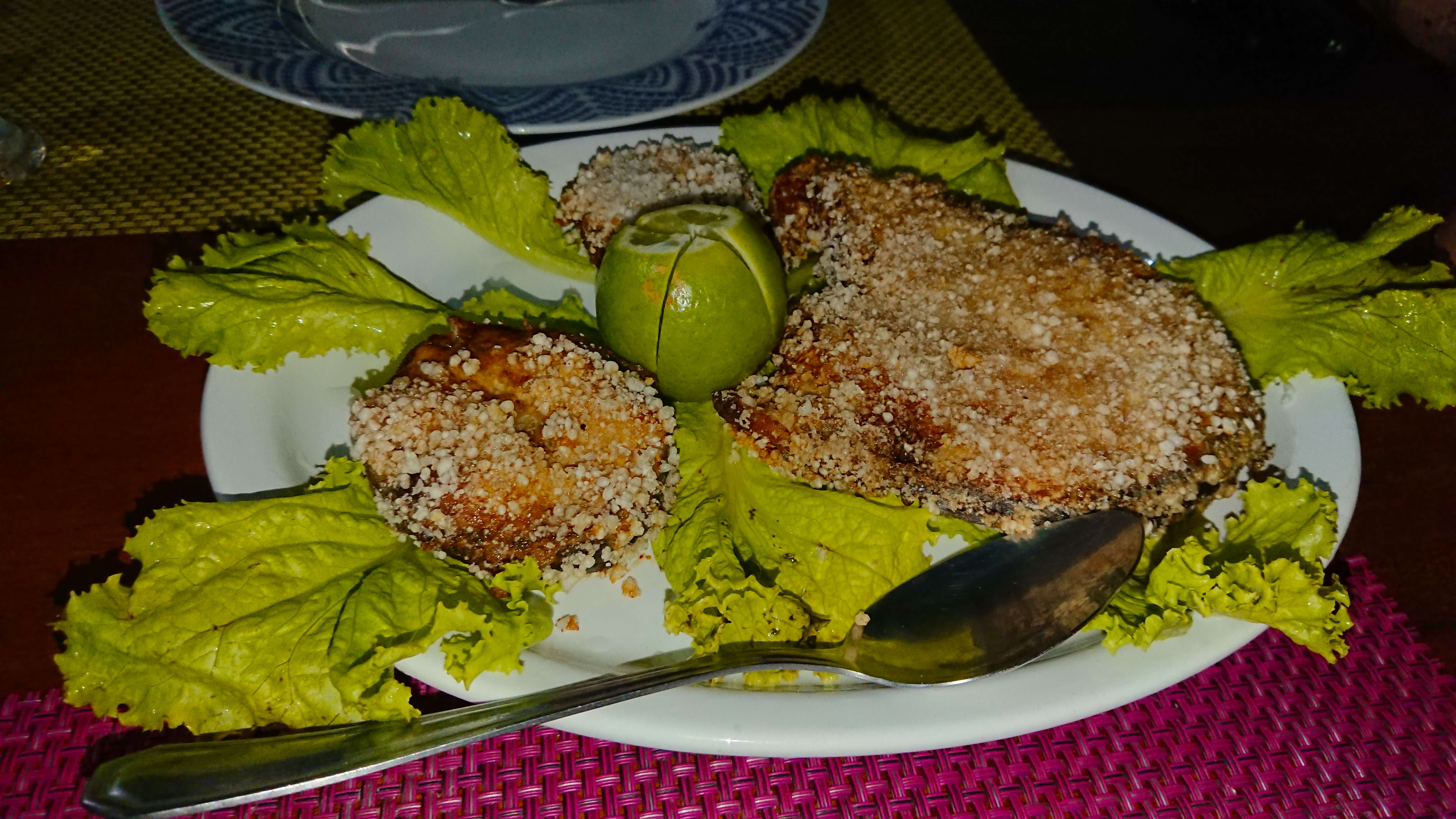 This super fresh fishy goodness set us back R$80…… and was worth every penny! (It also included a mountain of rice and 2 beers)

Afterwards, we retired for the night, back to the house of chocolate.

When we first checked in Carol had a little shock. It sounded as if a 7 foot tall frog was sharing the room with us. He was either a giant, had a megaphone or his vocal projection was off the chart! And then he introduced himself. 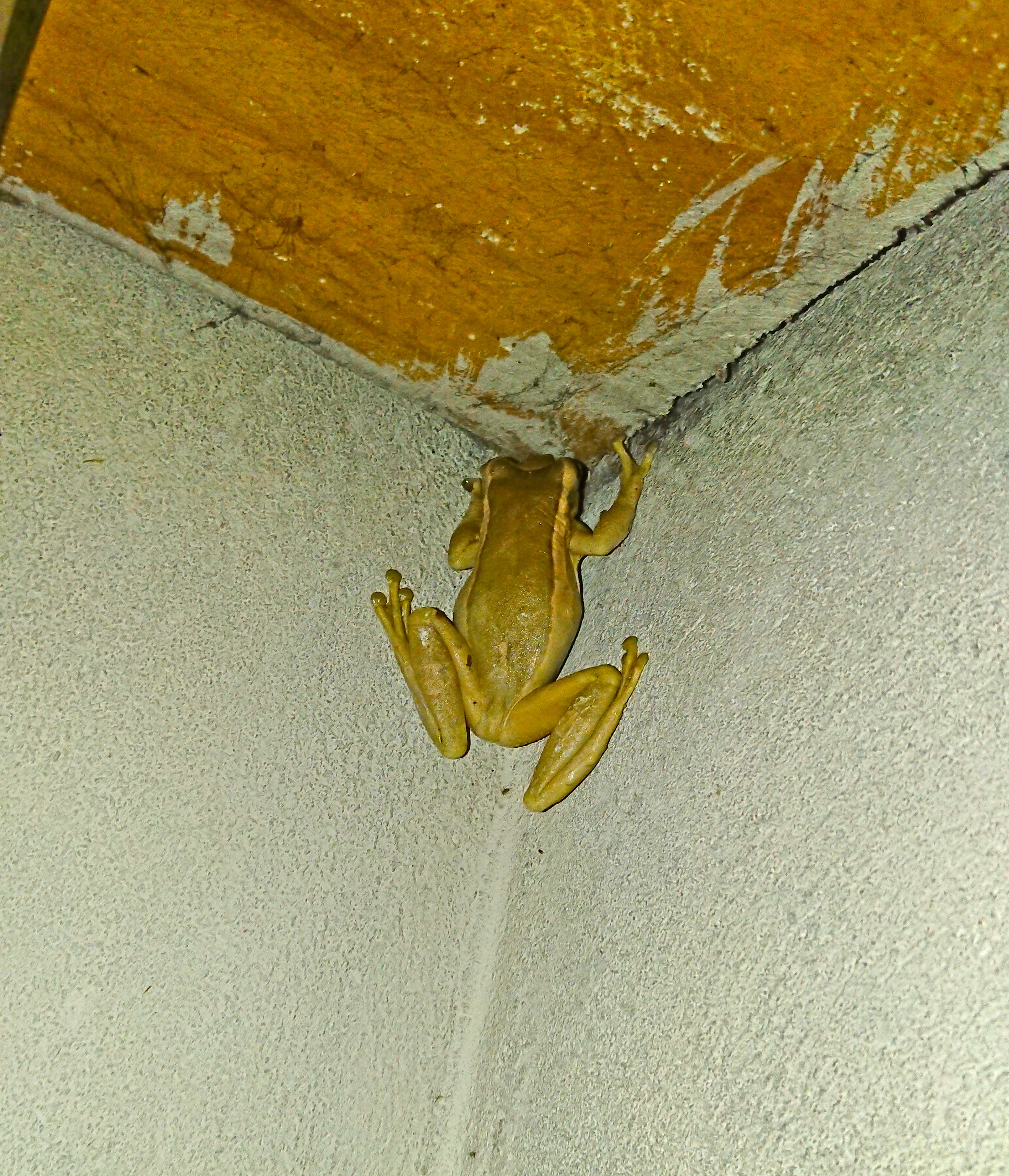 Such a beautiful creature! Not quite as glamorous as his Costa Rican frog brethren, but still a thing of beauty.

Carol thought otherwise. “I CAN’T SLEEP HERE! Not with that in the room!”

Admittedly, he was the Pavarotti of frogs, and he liked to sing. Being the knight in shining armour I am, I leapt to her defence and ushered our friend out with the help of my camera’s monopole. I was also called into duty before shower time to sweep the bathroom for invaders… poor froggo!

So he was escorted off the premises, we’d showered and then jumped beneath the mosquito net to avoid being savaged by the real jungle beasts. After a long day soaking in the sunshine, we drifted into a deep and peaceful sleep.

Being woken up by a frog landing on your face is an experience I’d encourage everyone to try. The mosquito net obviously wasn’t taut enough, and so his kamikaze dive brought him squishing right down onto my left cheek. His gooey little fingers gripping to my flesh through the net.

I imagine the entire island would have been woken had Carol learnt of the facehugger. I had to play it cool.

She was fast asleep, pinning my right hand down. Slowly I raised my left hand and attempted to push the net away… but that little dude had some serious grip strength! I pinched the net and gently pulled. Twang! Splat! Silence…

The bed was flush to the wall so he couldn’t have flown far, so I lay back down, waiting for the next assault. It never came.

It was only as we were leaving the island that I notified Carol of the incident. Had she known while we were staying, she would NEVER have closed her eyes again.

But that’s part of the charm of Boipeba. It’s rough around the edges. You’re not going to find any 5-star hotels in Boipeba, and I’m thankful for that. It’s homely, warm and welcoming.  If you want to get away from the madness of the big Brazilian cities, Boipeba is an amazing choice.

Frogs have a strong grip! Even through a lace mosquito net, those suckers are strong!

Ilha de Boipeba is a sanctuary away from the hustle and bustle of modern life.

Spending the day alone on the beach with the woman you love is amazing for the soul.