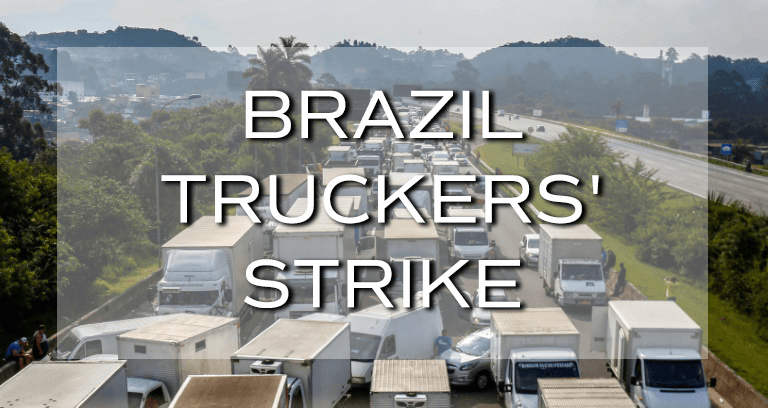 Have you heard of the Brazil truckers’ strike?  Probably not… but it appears to be bringing this country to a slow grinding halt!

In just over a week the supermarket shelves have gone from green and plentiful to worryingly bare.  A fortnight ago we fought our way through the Saturday morning farmers market in Lapa. We were spoilt for choice over which fruits and veg to buy for the week ahead.

Last weekend we could have ridden a horse through without touching a soul. We had the choice of whichever black and mouldy banana we wanted.

Due to a lack of fuel over 50 airports across the country are cancelling all flights, public transport in many cities has been reduced to minimal levels, and fast food delivery companies are having to charge an additional tariff to cover petrol costs.

I’m not normally prone to political writing but, as during the crisis in Venezuela which I found myself in, I feel the need to speak up.  I certainly don’t claim to be an expert on the situation, but when you live and breathe a country for 4 months (or 6 months in the case of Venezuela), you get a certain feel for the political winds.

What caused the Brazil truckers’ strike?

What caused the country to suffer an estimated $3 billion in losses, the loss of hundreds of thousands of kilos of perishables goods and there to be not a single bottle of Cachaça 51 (my go-to Cachaça) in the entire Supermarket!!!  How did we get to this terrible state?

Fuel prices have been on the rise since early 2017, ever since the impeachment of then-President Dilma Rousseff.  Brazilian politics are mired in scandals worthy of the worst TV daytime drama.  When over 100 politicians are under investigation or facing charges, often being charged by others who are also under investigation, it gets pretty messy.

Long story short, after the impeachment the new President, Temer, decided to hike up fuel costs, with nearly 50% going in taxes.

This obviously annoyed the people who make their living on the roads.  For over a year the drivers’ unions have been petitioning for a reduction in fuel charges, taxes and toll costs.  They’re also rightfully unhappy about their general working conditions, what with the state of the roads across Brazil and the ever-increasing demands on the drivers.

Horrifying fact: In a recent study, 66% of truck drivers were found to use amphetamines while driving to combat fatigue during long distance journeys (sometimes over 270km, driving 10+ hours without a break)

With no response from the Government, they decided to strike. 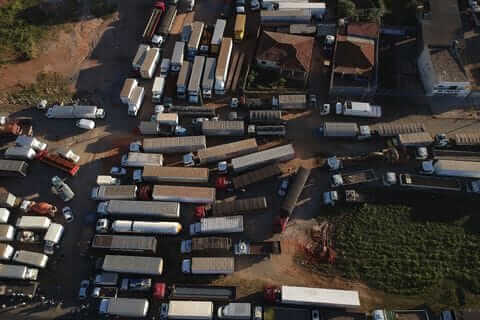 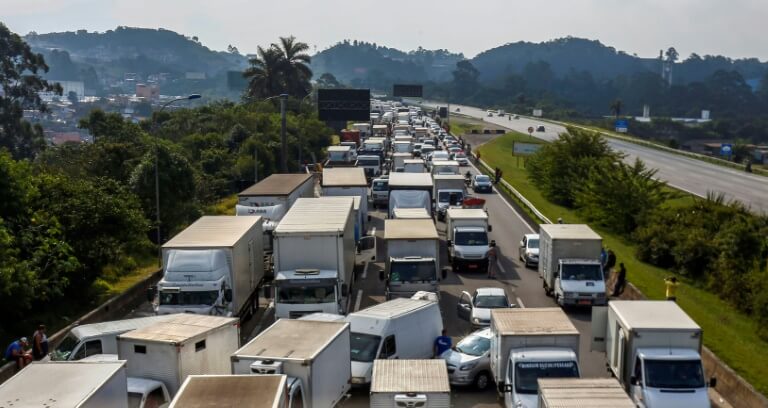 And boy did they strike!

According to reports, the Government has ‘given in’ to the demands of the drivers, announcing a handful of measures to try and end the crisis: President Michel Temer said Sunday that his government would subsidize the cost of diesel for the next 60 days, exempt empty trucks from tolls and introduce a minimum freight fare for truckers.

The 60 day subsidy is expected to cost the Government up to 10 billion reais (roughly $2.7 billion)… and where that money will come from (or more importantly be taken away from) is anybody’s guess.  Who knows? Maybe the magnanimous politicians will suck it up and absorb the costs themselves (if the Olympic and World Cup financial scandals are anything to go by, it’s probably a drop in the ocean for them).  Or more than likely they’ll just hike up taxes somewhere else, thus redistributing the suffering to another demographic. They giveth and they taketh away.

So yeah… that’s my 2 pence worth.  Writing about the Brazil truckers’ strike is maybe not the standard post you can expect on this site, but it certainly won’t be the last.

I prefer to emerge myself in a culture when I travel (I know, I know! I’m working on the Portuguese! I swear).  I love telling my own stories, but I also feel it’s important to tell the stories of others too.

Are you here now?  Has the Brazil truckers’ strike affected you or someone you know? I’d love to hear your thoughts and comments below.