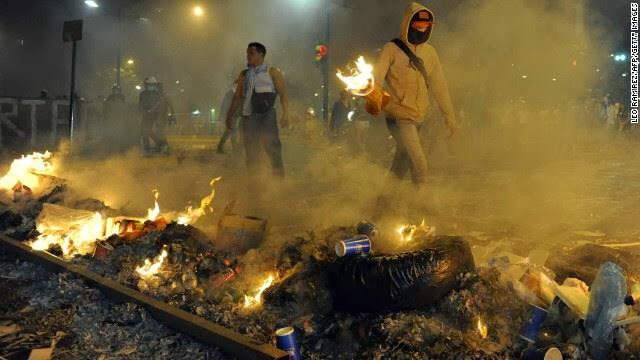 ” Change does not roll in on the wheels of inevitability, but comes through continuous struggle.

And so we must straighten our backs and work for our freedom.

A man can’t ride you unless your back is bent.”

Before I set out on my travels my father gave me a little nugget of advice… “Keep your head down, don’t get involved in local politics.”

Wise words… and I’m sure one day I’ll learn to heed such sage council… but not today.  I despise politicians.  I’m sure there are a few decent ones out there, but as a rule I agree that “politicians are like warts on the body of society.” No country is immune… they all seem to be infected with this disease (a little strong perhaps, but you get my point).

When I landed in Venezuela a year ago they were riding a wave of political turmoil with the rumours, and then subsequent confirmation of the death of President Hugo Chavez. The country went nuts (as described in The make or break night)

I witnessed first hand how passionate but also how divided the people are. Thankfully the 2013 elections were relatively incident-free, but there was an underlying tension that was quite palpable. The pot has been bubbling for the last 14 years… and now it’s boiling over.

I don’t claim to be an expert, or even very knowledgeable when it comes to the inner workings of Socialism and the broader Latin American political picture… but with the current situation you don’t really need to be… it’s grim.

With President Maduro ordering a complete media blackout, plus the expulsion from the country of a Colombian news team and CNN (that was later reversed) for “war propaganda”, it’s difficult to get any solid, concrete idea of the situation. “They want to show the world that there is a civil war in Venezuela” quoth Maduro.

You can shut down the TV cameras, but social media is a bit more tricky (that’s not stopped him in San Cristobal where all Internet services have been shut down, alongside the water and electricity… but only the bourgeois need luxuries like that!). Twitter, Facebook, Instagram… they’ve all been flooded with images and videos, usually from mobile phones, which depict some of the most upsetting footage I’ve ever witnessed. For over 4 months I walked those streets, I visited those cities, I shared a bottle of the good stuff with people from most of the towns that are flashing up in the pictures.

Yes, it wasn’t the safest country in the world. Yes, you had to be cautious at all times when wandering the streets… but now it resembles something akin to Iraq or another war-ravaged country.

“What CNN is not showing,” Maduro said, “is the people working, studying, building the homeland.”

Is that because people can’t actually get to work because of the streets being shut down? True in parts of Caracas, and possibly many other cities.

And as for the studying, that’s probably because the majority of the teachers and students are out on the streets protesting at the 14 years of underinvestment (and being shot at for their troubles).

The Government are holding a tight line, denying any wrongdoing on the part of the National Guard. “There is no proof at all” claimed Elías Jaua, Chancellor for Caracas, “that the authorities are using arms against the demonstrators” 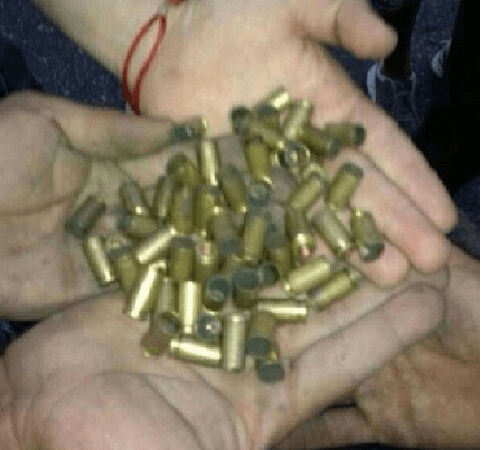 No, no, no Elías! I’m quite sure a ‘liar, liar, pants on fire’ would be quite reasonable here.

Other examples of a disgusting abuse of power include: 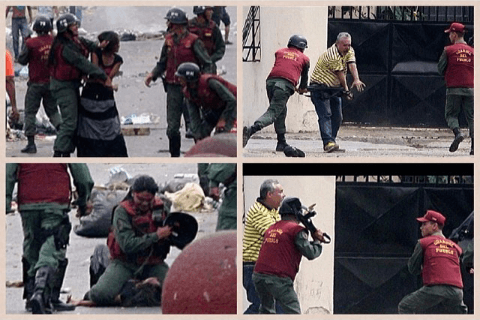 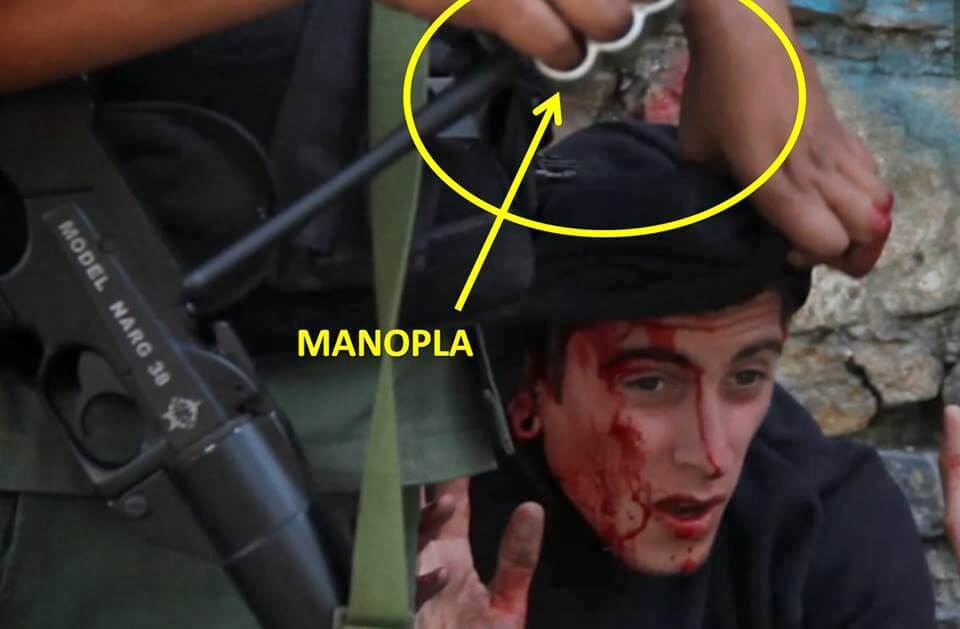 And not forgetting the national guard openly taunting protestors via megaphone and then firing at them.

The opposition isn’t blameless. Certain factions have armed themselves and abandoned the peaceful stance of the (former?) Opposition leader Henrique Capriles. Mobs gather in the streets and hurl rocks at the police and molotov cocktails at the tanks… stress, conflict, frustration, intolerance… all can bring out the worst in people, and transform formerly passionate Venezuelans into fanatics and radicals. The new Opposition figurehead, Leopoldo Lopez, holds a much more aggressive stance… one I personally don’t agree with, but then again I’ve not been living there under Socialist rule for the last 14 years.

Aside from the rather heavy-handed National Guard, the local folk also have to watch their backs for the government armed Colectivos (armed goon squads on motorbikes). They provide yet another source of injustice as they ride around, firing into protesting groups with complete impunity. There are ‘rumours’ that they were armed with the mandate of ‘discouraging’ any dissenters… but over time they’ve gradually grown out of control. Trying to re-leash a wild animal once it’s been released… never gonna happen. 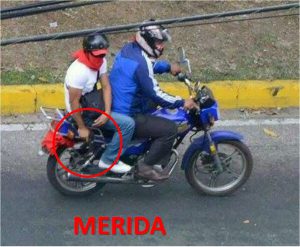 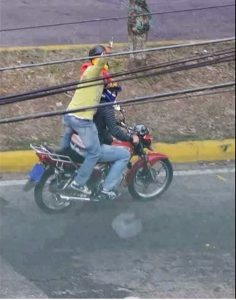 Name calling and ridicule are nothing new in politics, but with President Maduro’s many gaffs and blunders (saying Penis instead of Fish, ranting about ‘SOS Venezuela’ whilst having no idea what SOS actually means, and claiming that the late Chavez had returned in the form of a bird and spoke to him… they are but a few) it’s almost too easy to take shots at him: 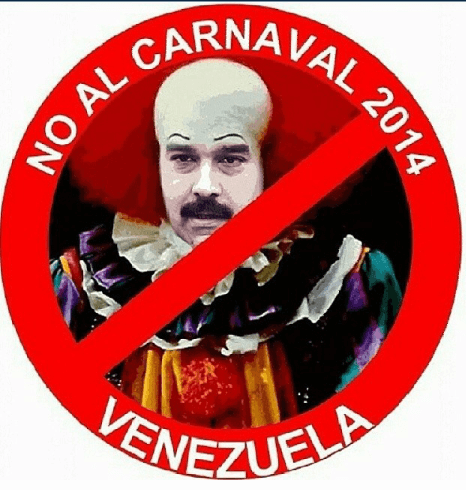 Both sides are claiming there is another force behind the problems. The Opposition claim that Maduro is just a puppet, and that Cuba’s Fidel Castro is now pulling all the strings. Maduro claims (amongst other things) that Washington is behind the social unrest, and the CIA are attempting a coup.

I’m confident that there’s some truth to both of those. They both centre around oil… oil is money, money is power. That leaves the actual Venezuelan people as pawns, stuck in the middle, and I can’t see either of their politicians losing an ounce of sleep over the rising death count.

But to describe it solely like that cheapens the genuine anger and injustice that’s felt amongst the people. They work hard, they pay their taxes yet one major complaint is that they don’t see their taxes going anywhere. As described in Road Hog back in April ’13, the roads are uncomfortable at best, a lunar landscape at worst… little or no investment. An electric grid that frequently takes the day off, leaving blocks or entire districts in a complete blackout… little or no investment. Hospitals with outdated equipment or such a lack of supplies that you must purchase and bring your own medicines, staffed by grossly underpaid medical staff… little or no investment. National production decreasing month on month causing an over-reliance on imported goods, a loss of job opportunities for locals and a shocking shortage of basic goods in the supermarkets… little or no investment.

Spiralling inflation, an underfunded education system and very few job prospects are other equally important complaints, but for me, the most shocking was the ‘security issue’. There’s a gun or two knocking around, I knew this from day 1 (when I saw the restaurant sign that read ‘No guns. Leave them in the locker room’… delightful!)

The people want change… and not just a handful of people… a fair chunk of them! 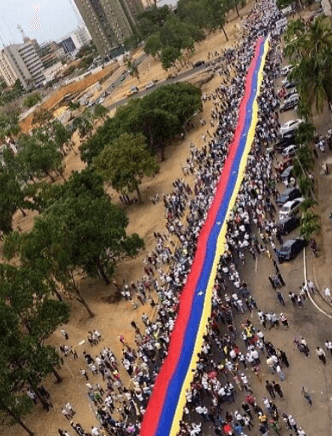 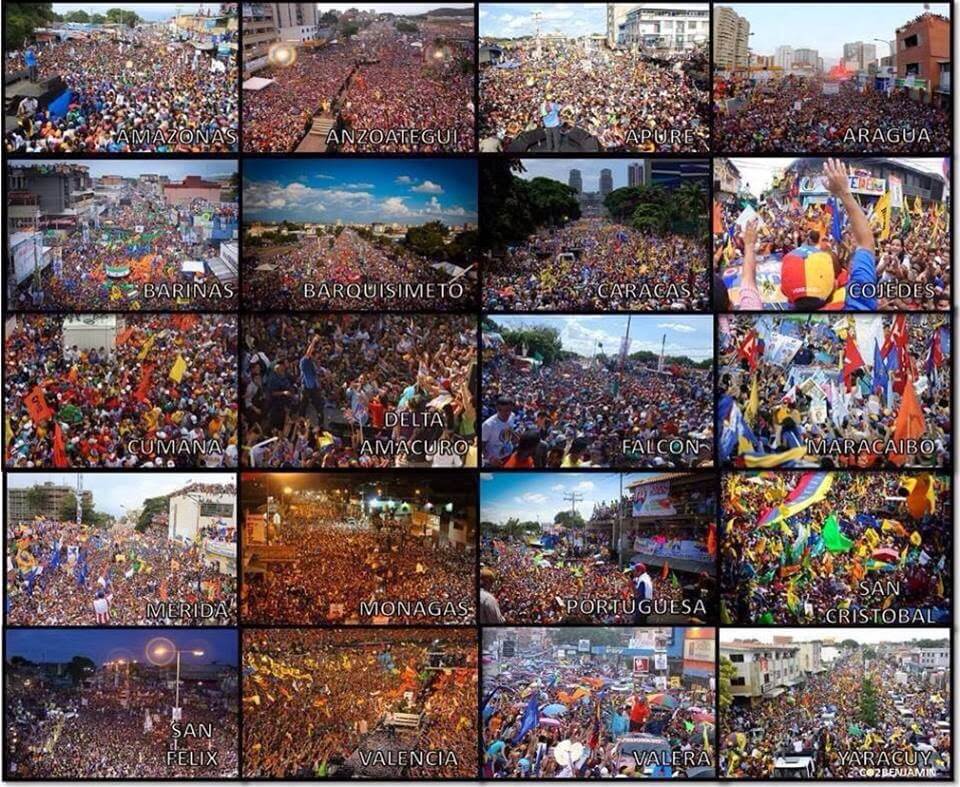 For all the negative external factors, the Venezuelan people bear it with an enviable stoicism. Nicer, warmer, more humble people I could not hope to meet. So many backpackers bypass Venezuela on their gringo trail… but to do so is to miss out on a magical country. The beaches, the food, the landscapes, the music… the people (there are bad ones, but there are many, MANY more good ones).

There is no quick solution. The years of intolerance and mistrust will take time to heal (and I believe it can heal). I only hope, with all my heart, that they can find a solution soon, before any more lives are lost.

4 thoughts on “Venezuela… what a difference a year makes”