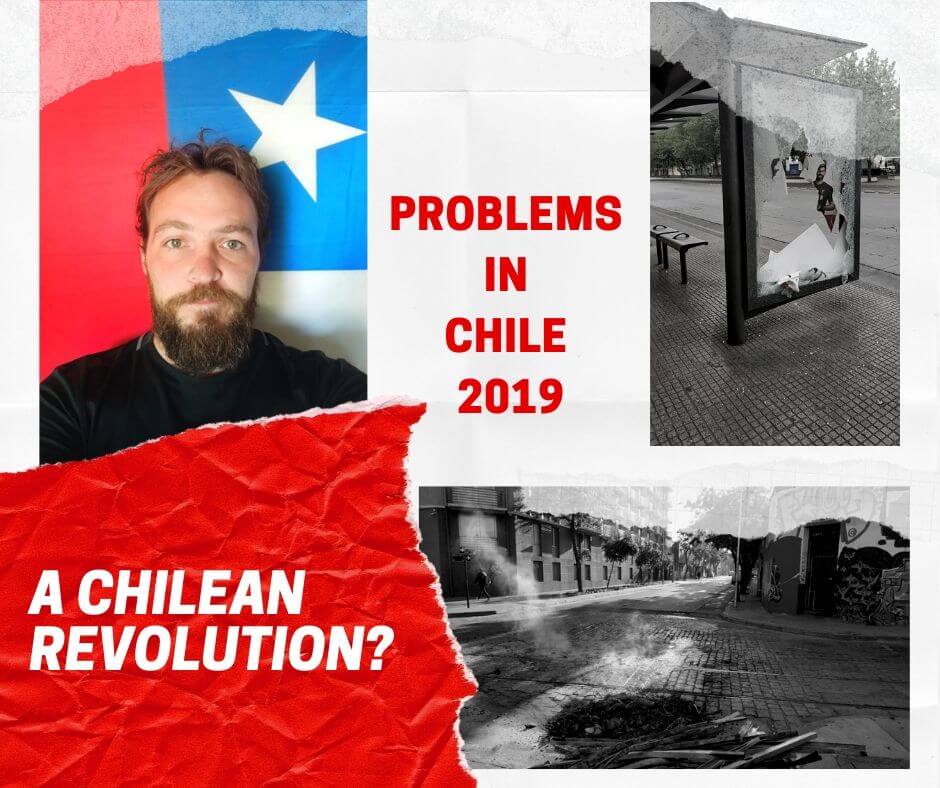 Problems in Chile are not a new phenomenon. The country, billed as the most stable in Latin America, has that stability built on a foundation of misery and repression.

I’m no Chilean historian, nor do I claim to be an expert on the country. I’m just a travel writer who happened to be in the wrong place at the wrong time. During that time I got a crash course on the current problems in Chile mixed in with a poignant history lesson.

Why was I in Chile? Having spent over 2 months in Paraguay I needed to leave to renew my visa, plus I found an awesome sounding host through Worldpackers.com. I’d booked a 3-week session where I’d learn the fine art of goat farming. It was a fantastic opportunity which I’d been looking forward to for months.

As with most things travel-related (or is it just me?), things rarely go to plan.

I earned my new nickname of Forrest Gump as I once again managed to find myself in one of history’s seminal moments. Clearly I wasn’t content with witnessing the collapse of Venezuela, the fall of the Argentinean economy, the biggest forest fire in Amazonian history to name a few. I want more living history!

When I booked my 44-hour bus journey from Asuncion to Santiago I presumed the worst thing to happen would be a numb bum. When I arrived to discover my Airbnb had cancelled on me, that was an annoyance but it didn’t spoil my day. It actually turned out to be a lifesaver.

I found a nearby hostel, checked in, finally lay in a comfortable bed and then… and then the country went to s##t!

That evening, with the increase in Metro fares, the poor camel’s back was destroyed.

So all the problems in Chile were purely down to an increase in Metro tickets?

If you watch the majority of mainstream news then that would appear to be the case. Just a bunch of kids spitting their dummy out and causing chaos.

That was not the case!

The media’s obsession with running with the ‘fare increase’ line is insulting to the Chilean people and their current plight.

So what’s it all about?

Almost all ‘public’ services in Chile are privatised. You want an education? Medical care? Practically anything else? You pay through the nose for it. Students are paying off their debts for the next 10 to 15 years while people who require medical treatment will too be paying it off for years to come.

By itself this isn’t unusual around the world – in the UK students carry their student debt for years after qualifying and the US healthcare system is madness. What’s different is the inequality in Chile. Out of the top 30 wealthiest countries in the world, Chile ranks number 1 for inequality.

The top 8% earn more than the bottom 60% combined. The pension system that everyone pays into is used as a slush fund for private investors (3 of the 6 pension companies are owned by American companies). They gamble the money on investments. If they pay off, the dividends go to the wealthy shareholders. If the investment goes bad, bye bye pension money. They already get screwed, receiving around 30% of their working wage when they retire which is widely believed to be the cause of the rise of elderly suicide.

Just as a tourist, prices in Chile are expensive! An average shop will cost the equivalent of a European shopping trip. Throw in a recent 20% hike in energy prices and you get a clearer picture of the problems in Chile.

As I said before, the price hike on Metro tickets was the final straw. What started as students jumping turnstiles and refusing to pay quickly turned nasty. 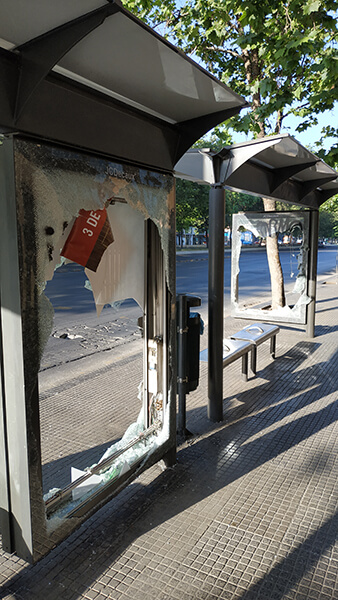 I arrived on the morning of Friday 18th October 2019. That evening the people took to the streets and destroyed around 50 Metro stations. The fires raged long into the night, starting a conflict that rages on to this day.

The headquarters of the energy company, the one that had just hiked up the prices 20% (despite already making millions in profits), was also set ablaze. Other targets were banks and supermarkets.

The military response was brutal.

This is where my anger rose.

The riots were reported on around the world, yet all seemed to lead with the ‘angry teenagers’ headlines. Blame seemed to be placed firmly on the protestors with absolutely ZERO coverage of the extreme, horrific response from the military.

Thousands of troops were deployed onto the streets, tanks rolled down highways and tear gas was fired like confetti. Those teenagers who were protesting? Beaten, kicked and dragged through the streets by fully armed military personnel. Kids!

The media seem to have misplaced this footage, but luckily with the magic of social media their atrocities are public for all to see. A quick search for the hashtags #Chileprotests, #ChileResiste and #ChileDespierto reveal a level of brutality that will turn your stomach.

Live rounds being fired at protestors, bloody lifeless bodies being dragged by their feet and cars ramming into protestors. That’s just a flavour. When the President announces “We are at war” and that the protestors are “The enemy of the people” (gosh, where’ve I heard that phrase before?) it’s not surprising that the army are acting without a shred of humanity.

Yet the media still seem to gloss over it. I’ve not seen one front page or ‘breaking news’ headline detailing the atrocities.

The final straw for me came when the fires reached 1 block from my hostel. Protestors ripped the wood from nearby fences and set them ablaze in the middle of the street. That was too close for comfort so I left the next day.

Who knows. The problems in Chile don’t look like ending anytime soon. The protests quickly spread to other cities – Concepcion, Valparaiso, Antofagasta, Chillan, Punta Arenas, Talca, Temuco and Valdivia. All are now officially under a state of emergency. This means more curfews,

The media continue to report the use of tear gas and water cannons while the soldiers continue to shoot and beat their own countrymen.

President Pinera claims “We are at war against a powerful enemy” while demonising and vilifying the protestors. Aside from a u-turn on the Metro price increase he refuses to address any of the deeper underlying social issues which led to this tragedy.

Chile is just the latest Latin American country to erupt in protests and violence. Bolivia, Ecuador, Peru and small outbreaks in Argentina are all hotspots. Some on social media claim that “Latin America is finally waking up” to the corruption and social inequality, yet speaking with locals on the ground you get a different, more pessimistic response.

“This is just another cycle. The people will get angry, small changes will be made then they’ll forget.” They’re the words of multiple older people I spoke to in Chile, Argentina and Brazil. They don’t see this as a mass awakening… just another part of the endless cycle of corruption, outrage and repeat that plagues Latin America.

If there is a revolution will the corrupt be replaced by a saviour or just another dictator in the making? Who knows. I do know that people are being brutalised on the streets of Chile and the global media are turning a blind eye.