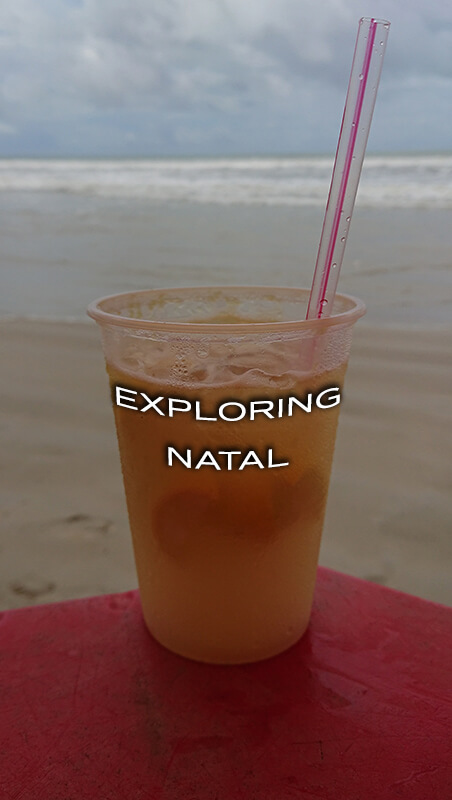 Natal in Portuguese means Nativity/Christmas… we were going to Christmas!!!!!!!

I’m not naive. Having spent a couple of Christmases in South America I was prepared for a lack of snow, elves and fat men with chimneys.

But still… surely it had to get the name from some tenuous connection! A population of fat men with beards? A penchant for red outfits? An unparallelled generosity?

There had to be some link!

Before I make the grand unveiling it’s worth taking a moment to reflect on how we got here. We’d covered close to 3000km and visited the states of Rio de Janeiro, Bahia, Sergipe, Pernambuco and now we were on our way to Natal, the capital city of the great state of Rio Grande do Norte (Bus: $R100 each).

So back to the grand announcement… drum roll please!!!

Natal is called Natal because… it was founded on December 25th, 1599. That’s it.

Shame on you Ye Olde Portuguese conquistadors! Your lack of imagination is rivalled only by your brutality.
I’ll suggest a couple of names at the end which I believe would have been MUCH more appropriate.

We stayed in the area of Praia de Ponta Negra (Airbnb: R$159.97), which I would wholly recommend. If you do, you get to see this view every morning:

Unfortunately, I have to slap your excitement back down.

Unless you have a time machine, you’ll be disappointed. That giant sand slide, called Morro do Careca (The Bald Hill) and located on a beach named Praia de Ponta Negra, was once one of the coolest things in the world. You could slide all the way down and into the sea, but not anymore.

In a very un-Brazilian move the government decided that the constant climbing and sliding was destroying the environment, so they shut it down. It’s rare that I’ll congratulate the Brazilian authorities for 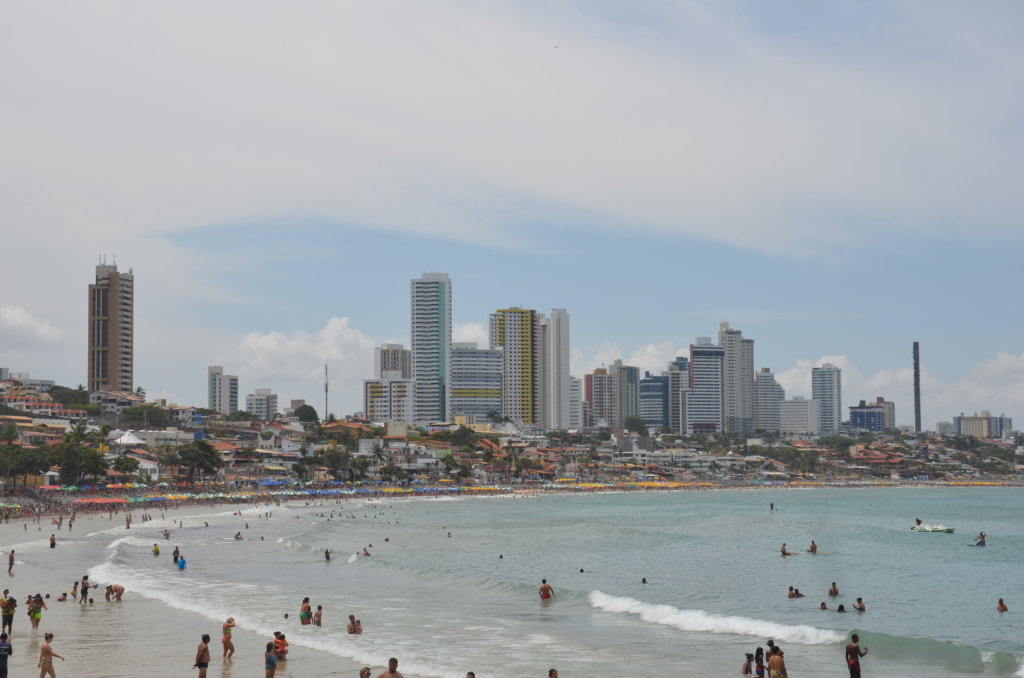 That’s not to say that there are no sand riding opportunities to be had.

Take an Uber (R$30) to a beach called Genypabu. There you’ll find a multitude of dunes. You can slide down smaller dunes (for an exorbitant price) or hire a quad bike to go exploring. As fun as it looked, we didn’t get a quad bike. Natal is definitely geared up for tourists, which means tourist prices. 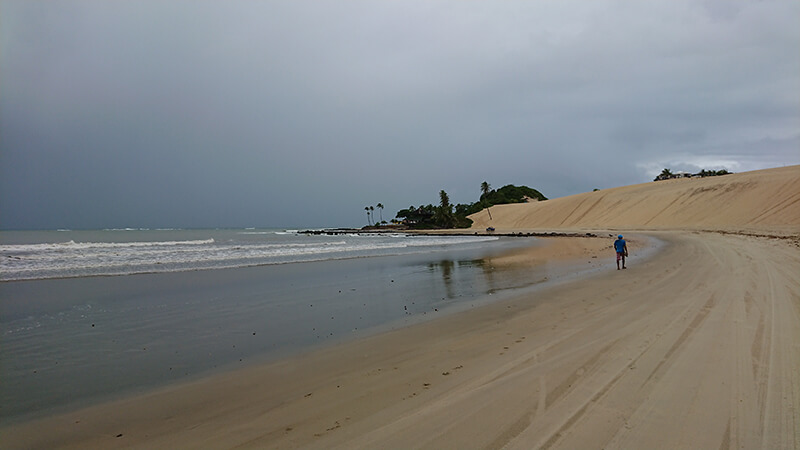 The reason for the tourist trade is partly because of the beaches and dunes, but our reason for coming was because they’ve got a giant friggin tree!

The Largest Cashew Tree in the World

Talk about saving the best ’til last huh! Who doesn’t love a record-breaking tree!

Over 8000 square metres, more than a thousand years old and producing an estimated 60,000 fruits per year… its a beast!

For just R$8 you can wander between the giant branches and, if you’re lucky, you’ll get to see some super cute little monkeys too. 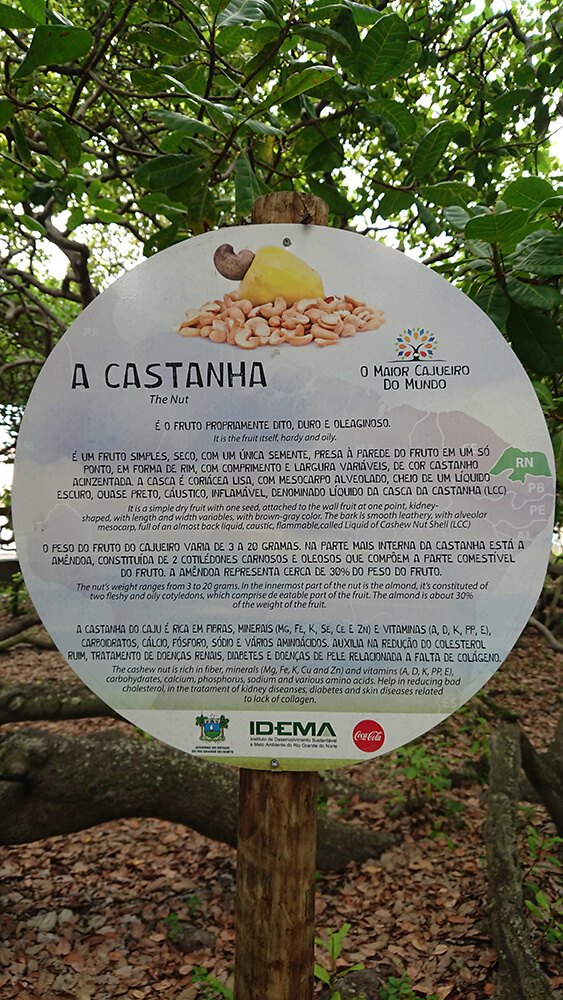 And… AND… for all you bloggers and Instagrammers out there they even have free wifi throughout the entire complex… the wonders of modern technology!

To get there you could take an expensive tour, and there are hundreds of them advertised all around Natal. Or, if you’ve got an awesome Brazilian girlfriend who knows all the sneaky tricks, you can just hop on a standard bus which will drop you off right at the entrance. R$80 or R$4… hmmm…. gee, let me think.

Once you’ve had your fill of the tree there’s a cool little market right outside with every cashew related nicknack you can imagine. It also has lots of pretty dresses and cachaças too, for all those with nut allergies.

Afterwards we enjoyed an average caipirinha (R$16) on Praia de Pirangi. Although not the nicest beach in the world, it’s nice and flat (the best compliment I could come up with).

What did we miss?

With only a few days to rush around we were unable to soak in the full Natal experience, so here I’ll list some other reasons to visit.

According to Wikipedia it’s the city with the 4th highest murder rate in the entire world, (FYI I’ve been to 3 in the top 7 and never had a single issue).

They like to mix things up when it comes to Carnival, as they celebrate it off season. While the rest of Brazil shoots for February/March, Natal has CarNatal (see what they did there?) in November/December.

There are plenty of beautiful beaches and coral reefs to explore, but keep in mind my shark warning from my earlier Recife post.

Just from the name alone, visiting Barreira do Inferno Launch Center (Hell’s Barrier!) is a must. It’s a rocket launch base of the Brazilian Space Agency… and if it surprised you that Brazil had a Space Agency then you’re not alone.

Brazil has a Space Agency! Cool!
Trees are fun.
Just because somewhere is listed as the 4th most deadly place to visit on the planet (that’s not currently at war), it doesn’t mean you shouldn’t go and drink a caipirinha on the beach.