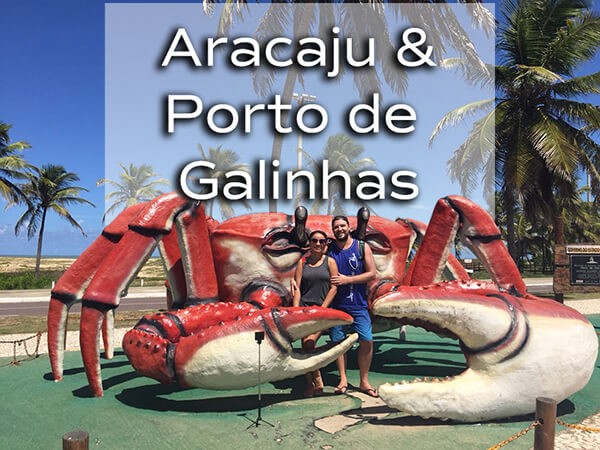 We were now well into the Brazilian roadtrip.  Starting in Rio de Janeiro, we’ve already covered 1600km, learnt how to make chocolate in Ilheus, been attacked by bees in Itacare, wandered through paradise in Ilha de Boipeba and eaten juicy juicy Acaraje in Salvador.  But time waits for no couple. We had a bus to catch and a birthday to celebrate! Saying goodbye to Salvador we hit the road… destination Aracaju! (Bus: R$300)

If not number 1, it’s frequently up there in the top 5 cheapest places to live in Brazil.  It’s the capital of the State of Sergipe, Brazil, and located around 300km north of Salvador.

We were staying with friends in both Aracaju and Porto de Galinhas, so all the guesswork was taken out of these stops.

My first, second and third impression of Aracaju… Man! This is a sleepy city! Considering that 33% of the entire state live in the capital, it’s SUPER chilled!

True, it does come in at number 18 in the Wikipedia list of ‘cities that have the highest murder rates in the world (not at war)‘, but it’s also one of the safest capitals with the best quality of life in the northeast region… I’ll leave you to juggle those facts.

Away from the coast, it just looks like any other industrial town. Apparently there a multitude of museums and galleries dotted around the city, but we didn’t stumble upon them. As it was one of the first ‘planned cities’ in Brazil it’s all neatly designed in a grid formation, but then you hit the water and… wow! It’s most certainly a city of 2 halves.

With the recent influx of investments from Russia, China and eastern European countries it’s slowly transitioning into a popular tourist spot. In 5, 10, 20 years it will probably be unrecognisable. For now, it’s a really nice, super chilled, not yet over-commercialized city with a fine stretch of beaches. 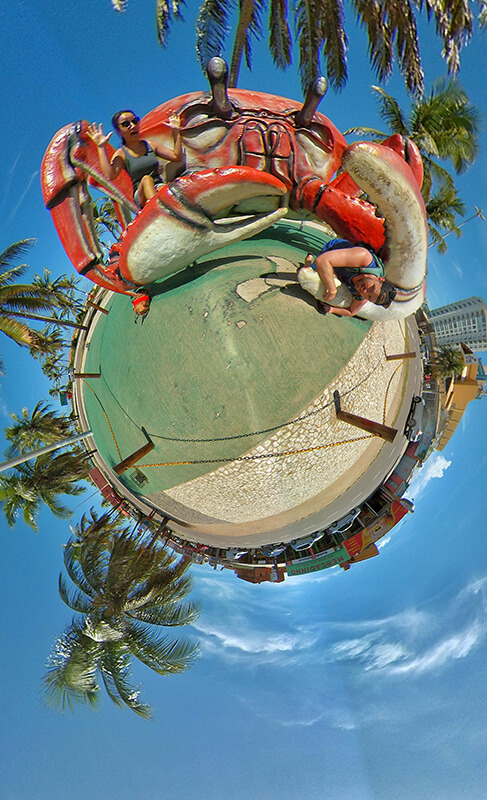 The giant killer crab was possible my favourite giant animal we discovered in Brazil (and there are a few). We were completely shameless in this tourist photo, but it remains one of my favourite 360 shots of all time.

I guess he’s there to signify the abundance of crablife in the area, and apparently it’s on offer across most of the seaside restaurants – we didn’t indulge as it’s not up there on our must-eat list. 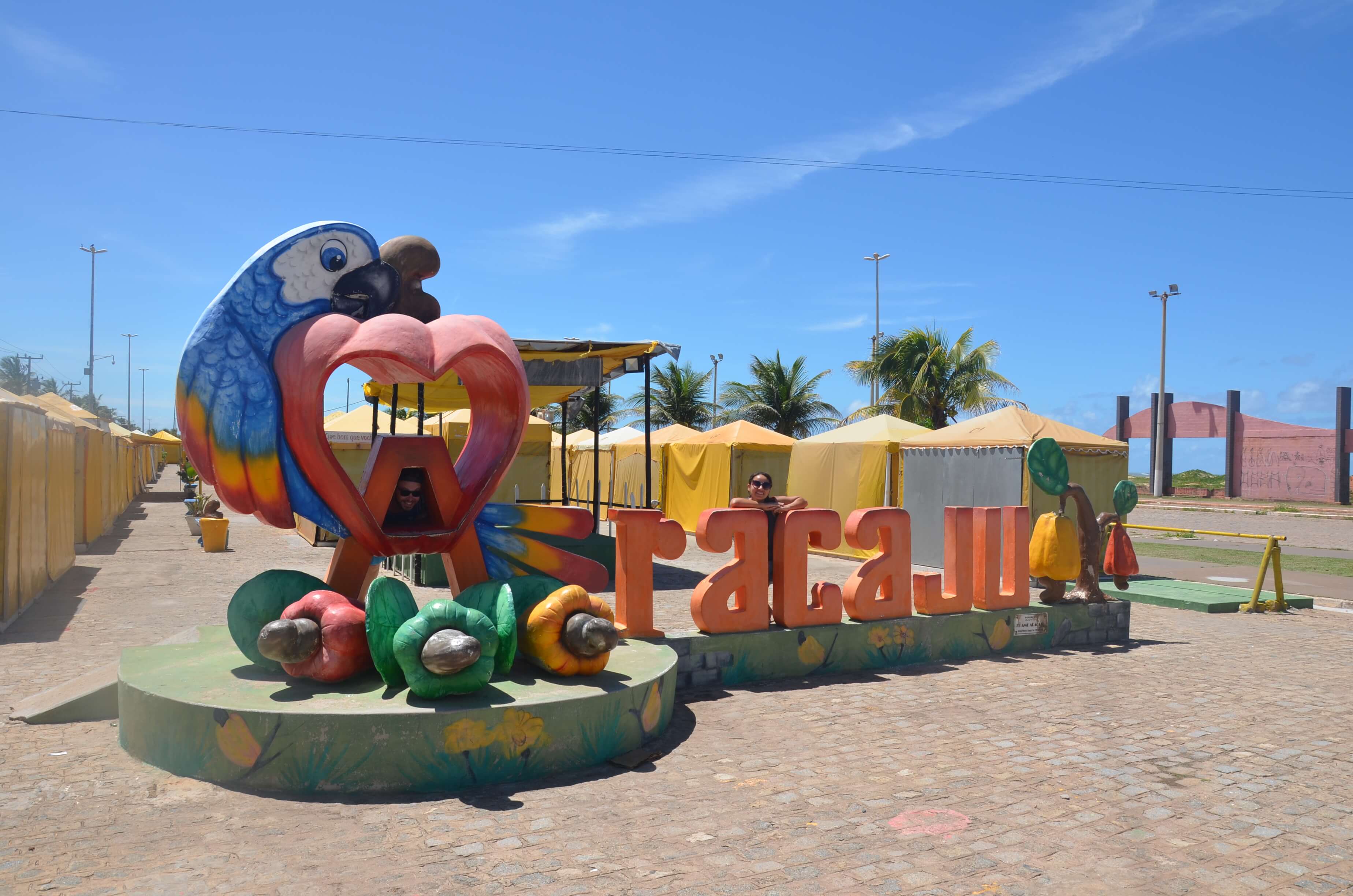 Coming from the grey concrete interior, the beachfront is super colourful. Not a pretty pastel like Salvador, but a dazzling array of fruity colours.

Further along the coast you’ll also find some phenomenal statues!

You may not get the sheer scale of these waterfront statues, so let me help you. 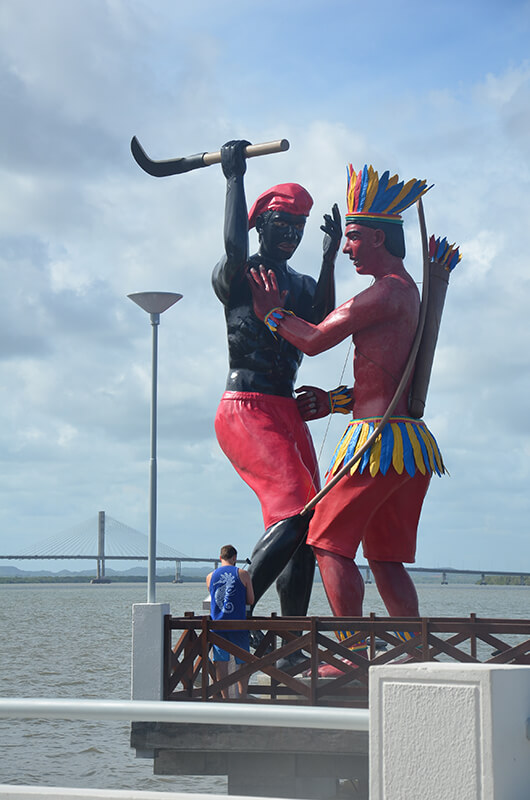 Each one represents a different character from Sergipe folklore, and you can find out much more about them across the road in the Museu do Homem Sergipano. 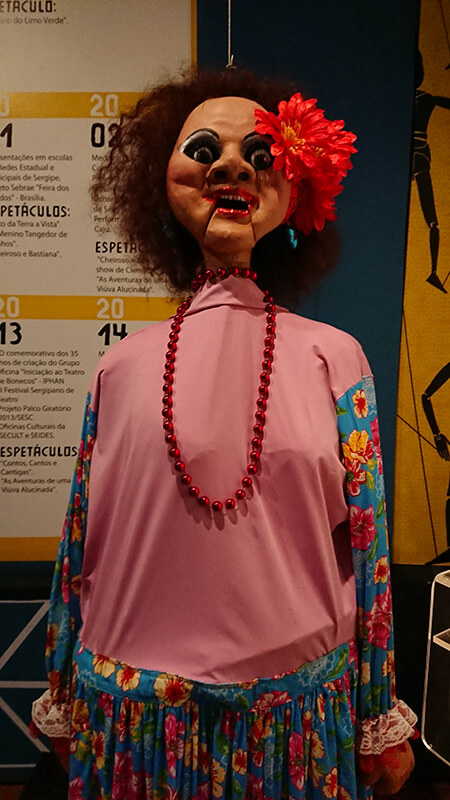 Also on the beach, near our crabby friend, is the Projeto Tamar… the turtle protection sanctuary. Sadly we didn’t have time to go in as I do love turtles, but we did get to meet this big fella: 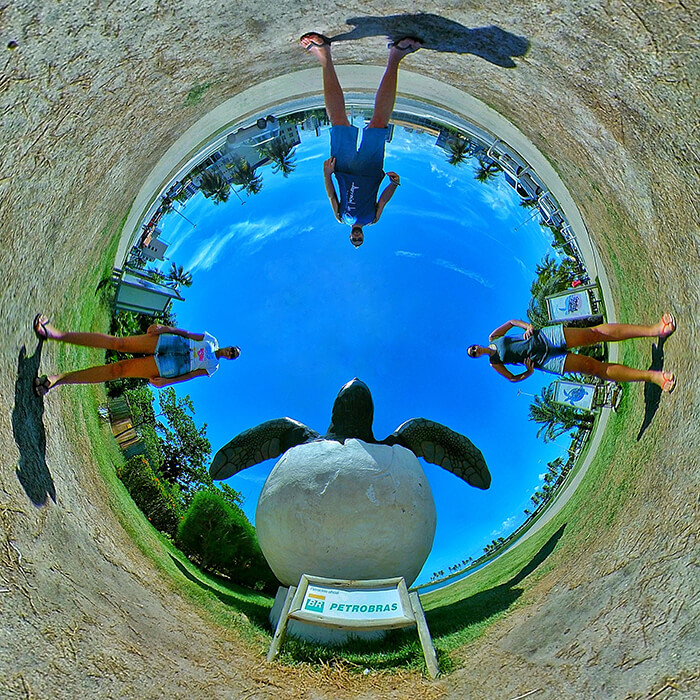 I’m not sure how much say the turtles got in the shameless promotion of the giant petrol company, as I imagine they’d still be a little peeved after the December 2018 oil spillage of 60,000 litres and the 1.3 million litres spilt in 2000 (to name but a few). Good work Petrobras!

10 points to anyone who guesses which one we visited!

Never before have I wanted to take a brillo pad to my nostrils to rid them of the stench.

Given time, the pong will fade but my fond memories of this quiet town will endure.

If you do visit and have time, we heard it on good authority that the boat ride to the Sao Francisco River is well worth it.

Our visit to Aracaju over, it was time to continue north to stay with more friends and celebrate the birthday of my amazing girlfriend, Carolina. (Bus from Aracaju to Recife: R$200 and then a taxi to Galinhas R$80)

Porto de Galinhas (in the state of Pernambuco) was, from 2000 to 2008, voted the best beach in Brazil (according to Travel & Tourism magazine). I wouldn’t say THE BEST, but it certainly is quite special. It’s just one beach in the 187 kilometre stretch of beaches in Pernambuco.

The name means The Port of Chickens, which conjures up all kind of goofy images… but sadly the smile fades when you realise the true origin. Again, like Salvador, this beautiful place has a miserable history involving the slave trade.

Until 1850 it bore the name Porto Rico, Rich Port. By then the importation of slaves was supposedly illegal, yet the practice was still far from over. To evade the authorities the smugglers would hide the slaves inside boxes of chickens, and upon arrival would announce “fresh chickens arriving”. Thus the port gradually adopted the name.

We were obviously staying far away from the high-end resorts, in a sleepy part of town around 10 minutes walk from the town centre. From our modest accommodation we could walk, barefoot, through the sandy streets to the beach. No hassle, no highways, no beeping of horns… just sandy paths and sandier beaches.

Clearwater pools, snorkelling and exploring the coral reefs, estuaries, mangroves… you can see why it’s a major tourist hotspot.

As part of the birthday celebrations we took the boat ride to Praia dos Carneiros. As with most boat rides in Brazil, the music is terrible yet with enough practice you can train your earlobes to seal themselves shut and just enjoy the scenery. 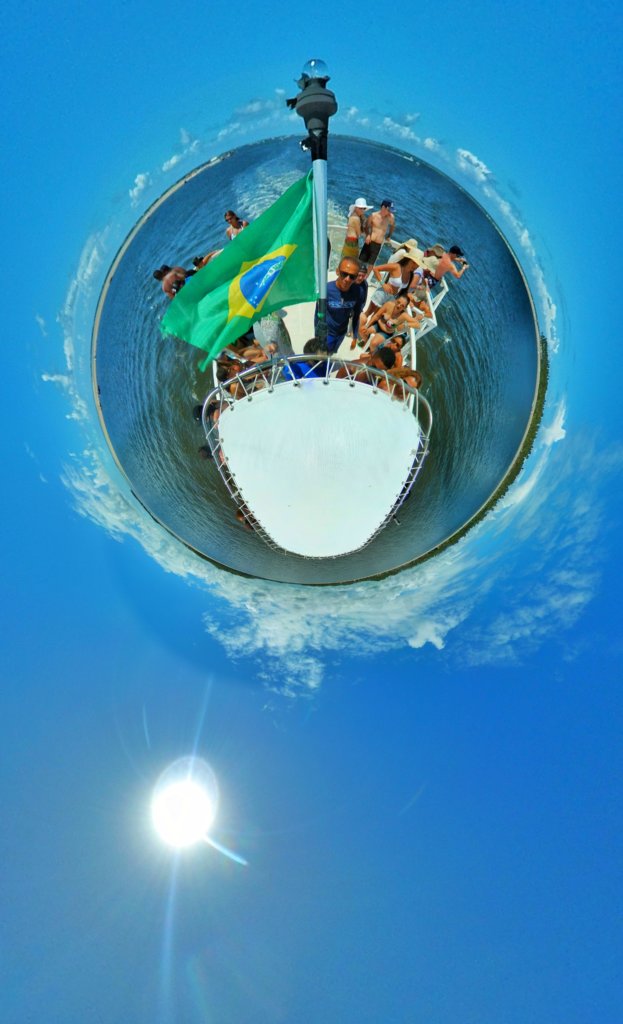 The boat ride (R$80) takes you to various beaches, all heavenly, all picture postcard locations and definitely all places we’d happily pitch a tent and settle for a week or two. 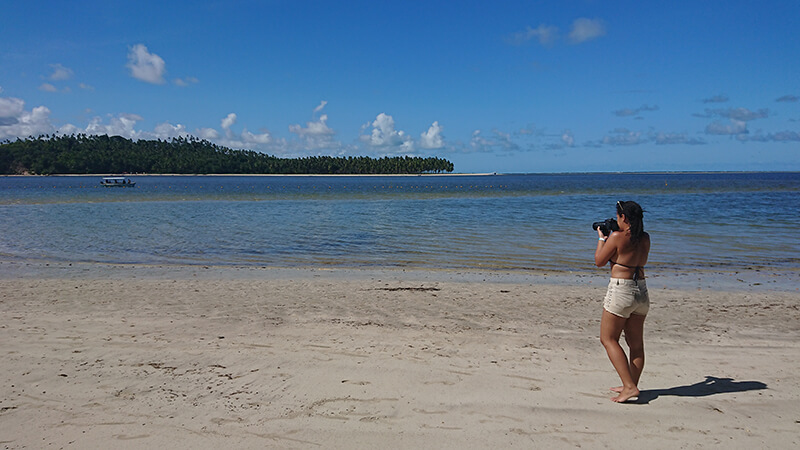 I imagine in the height of summer it’d be a different kettle of fish, sitting elbow to cheek with fellow sun lovers, but in April… paradise. 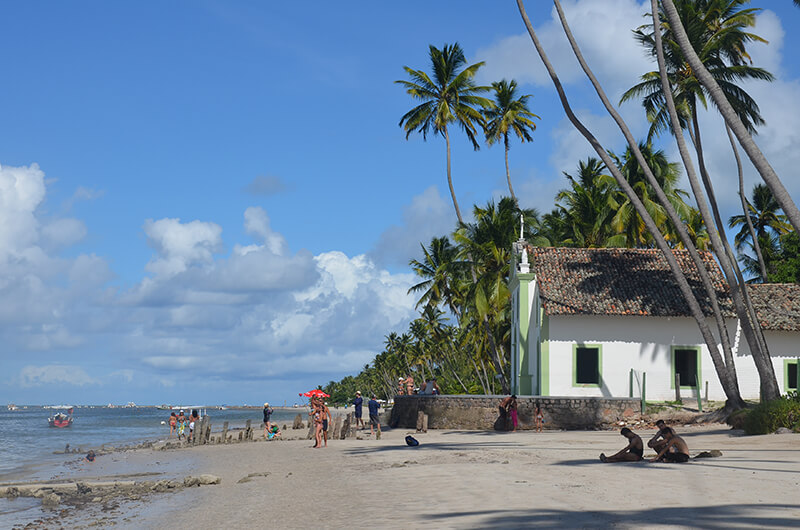 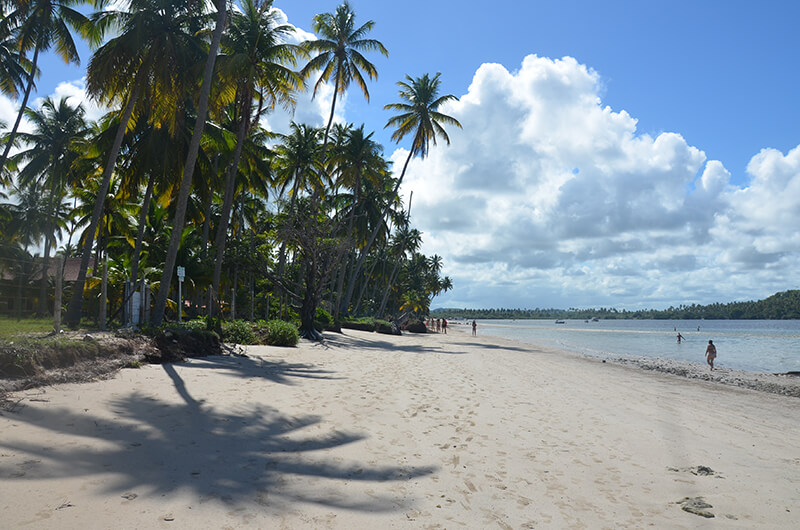 There seems to be a movement in Brazil, especially amongst Millenials, to escape the concrete jungle and find a life closer to nature. The 2 friends we stayed with had both quit their jobs in big cities and headed here. I imagine the money isn’t as good, but I believe that’s a trade worth making when you can walk out of your front door and sit in paradise.

It’s something both myself and Carol can totally relate to, as we too have had our fill of the big city life and are searching for a new horizon. Trading stability and security for adventure and new experiences… which one offers the better quality of life? I guess that’s for each of us to answer individually.

Galinhas definitely offers the adventure and beauty, and maybe Aracaju is a happy medium… a middle ground between traditional living yet with access to the magical nature of Brazil.

There’s also an added bonus if you visit Galinhas. If you’ve spent months and months practising your Portuguese so you can communicate with everyone you meet, you’ll likely be incredibly confused when you begin to hear Spanish accents from all over the continent. There’s a big contingent of Argentinians, Uruguaios and Venezolanos that have moved into town. Does this dilute the experience? Hell no! Each of those countries are awesome in their own individual way, and so you get a rich mix of Latino culture in one serving.

The northeast of Brazil is stunning!!! It may be dangerous, but it’s too pretty!

Pack your bikini/mankini… you’re going to want/need it.