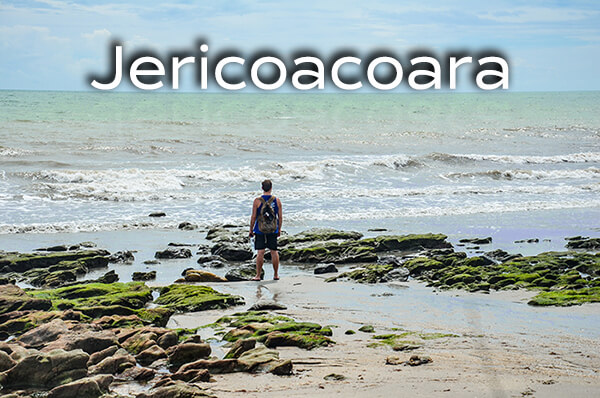 While some of the other names on our roadtrip, (Rio de Janeiro, Ilheus, Itacare, Boipeba, Salvador, Aracaju, Recife, Natal) may sound familiar, or are at least pronounceable, Jericoacoara may stump a few.

Jericoacoara… such a beautiful name (and a 23 point score in scrabble).

I’d love to tell you exactly how it’s pronounced, but my girlfriend laughs every time, so I won’t bother.

The northernmost location of our trip, we ended on a massive high!

I specifically requested (insert begged) to travel here long before I knew anything about it. One of my heroes in life is a certain Canadian fellow named Chris Jericho. From my early days watching wrestling to watching his magnificent rock band Fozzy… he is the ultimate performer, the ultimate entertainer, the ultimate showman.

But I will say, as I was scouring the Brazilian coast on Google Maps, I stumbled upon this name and knew it had to be.

So imagine my surprise when I learnt it’s one of the most beautiful places in the whole of Brazil! Woohoo! 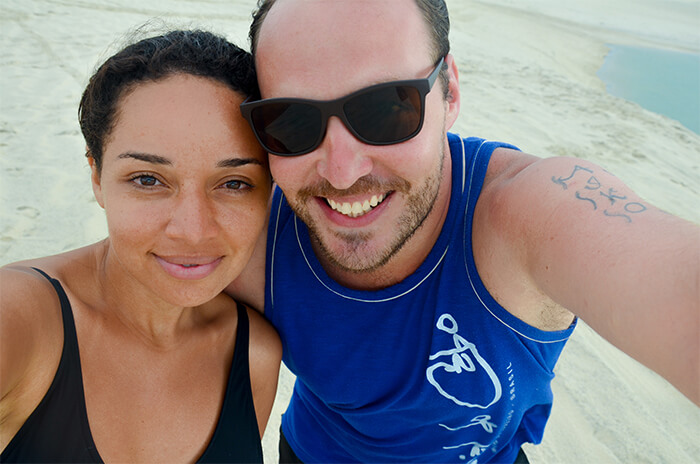 Before heading to our final destination we made a short stop in Fortaleza. The state capital of Ceará (my girlfriend’s home state), it grew from the original 1649 Dutch settlement called Fort Schoonenborch. That may sound like a useless bit of information, but it’s also a cool name.

It’s the 4th most touristic city in Brazil, but I’ll be honest, I have no idea why.  I spent our few days here locked inside, furiously writing to clear the backlog of content for various websites.

Our one achievement here was to extend my Brazilian tourist visa, which was a major achievement in itself.

Carol popped out to visit some markets and catch up with friends, but my time here was spent glued to my laptop.

Things we missed in Fortaleza include the most important highway in Brazil (the BR-116 for those highway junkies), the third largest aquarium in the world (Acquario Ceará for the fish lovers) and Beach Park, the largest water park in Latin America (for the cool kids).

It also features 7th on the list of ‘highest murder rates in the world of all cities not at war‘ (for the lunatics).

We’ll probably go back one day.

Now let’s get to the good stuff!!! 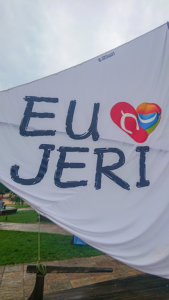 The word Jericoacoara comes from Tupi (an indigenous language) and means “lair of turtles”! Who knew turtles had lairs?!? That makes them sound so badass!

To get there I’d recommend a transfer service from Fortaleza. Jericoacoara is a national park and no cars are allowed to enter. You must book a shuttle service to take you from the entrance, Jijoca de Jericoacoara, to the actual town. It takes between 6-8 hours and costs around R$80 each one way (or you can fly as Jijoca has an airport).

If you opt for the shuttle service, you’ll hopefully stop at the same random castle we did, and meet the same awesome talking parrot which terrorised my girlfriend. 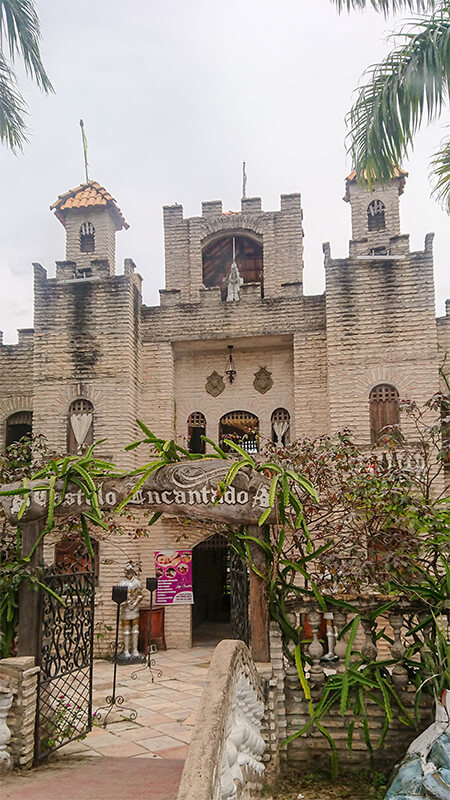 Once at Jijoca you hop off the bus and split up into the various waiting 4x4s. I’ll admit to being lucky I was with my Brazilian girlfriend and her mum. Without their Portuguese skills I’d have no idea what was going on. Lots of shouting, pushing and shoving (to get a good seat) and general Brazilian chaos.

Within minutes of pulling away from the terminal you’ll pull into another terminal, where once again there is no information given. At this one you must all hop out and pay the tourist tax to enter the National Park. R$5 per person per day, and be honest about your stay. They can and do check when it’s time to leave.

What follows is both epic and brutal in equal measure.

You start on normal roads, and then drive for 40 minutes through the sand dunes. “What can be brutal about that?” I hear you yell. Ask my spine, which is now 2 inches shorter! Bouncing through the dunes for 40 minutes is a true test of endurance. What made our journey even more eventful was being chased by savage looking black clouds! 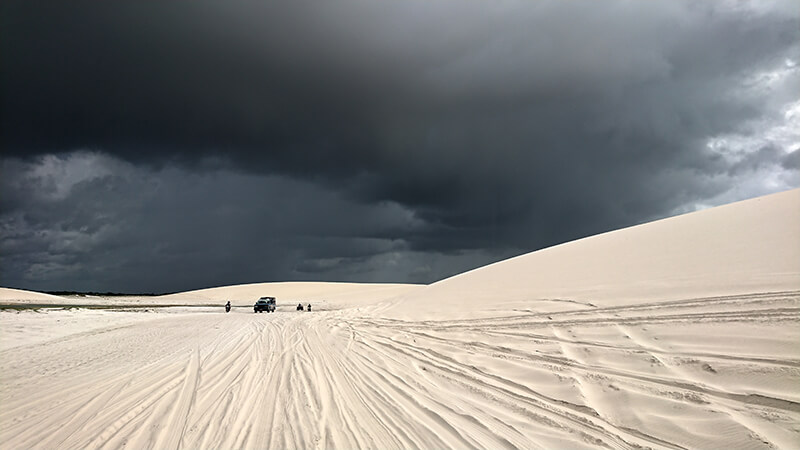 In the back of an open-sided 4×4, with my unprotected backpack on the top… no thank you! Drive good sir! DRIVE!

Thankfully we outrun the shadow of Mordor. It actually turned out to be just a tease, as the rain never came… the first night.

Let’s take a little break to discuss the weather.  You’ll never be cold in Jericoacoara as it fluctuates between mid-20s up to mid-30s, but you can get very wet.

Rainy season goes from January to June, but don’t let that put you off. When it rains, it really lashes down, but then it’ll be gone just as quickly. Clouds move fast in this part of town! In rainy season you’re much more likely to find a great discount on accommodation, and the rain helps fill up the multitude of lagoons that you’ll definitely want to visit. 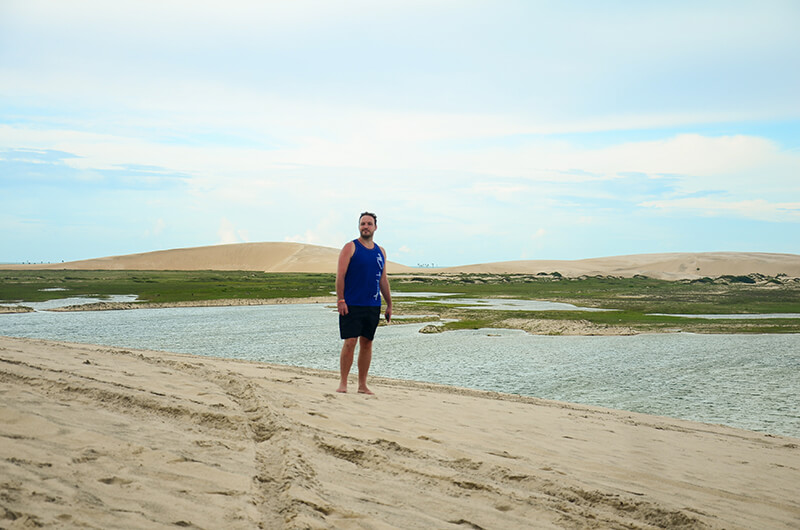 July to December are the driest, which means tourists and an increase in prices. It also means a truckload of windsurfers, kitesurfers and other wind-thrill junkies due to the perfect conditions.

Stunning sunsets are easiest to find in the dry season, but there’s still plenty to be had in the rainy season too.

FYI – Most of December, January and July are public holidays in Brazil, so expect prices to go up.

The 4×4 drops each passenger off at your front door, so be sure you have the address of your accommodation.  I don’t think there’s a single street name, so names of buildings and an eye for landmarks is somewhat important. But I wouldn’t worry too much though as it’s tiny, so there’s very little chance of getting lost.

Wandering through the sandy streets you’re immediately filled with good vibes. It has that chilled, bohemian, surfer atmosphere which is good for the soul. No cars in the streets adds to the tranquillity, although there are occasional taxi quad bikes driving through. Street lights are also outlawed, so during an evening stroll you’re lit by the light of the shops/restaurants/bars until you get to the residential area, and then black! A flashlight or torch app are well recommended.

Touristy shops selling beach toys, beautiful handmade jewellery and other crafts, vibrant clothing and lots of ice-cream. Lots of touristy things, but it doesn’t have that overbearing soulless vibe that other hotspots do. It keeps the local, homemade, earthy mood and window shopping is actually a joy (and I NEVER say that).

FYI – There are no cash machines in Jeri, so you’ll either need to bring enough cash or pay on card.

Whether it’s the beach, the dunes or lagoons… this is the real reason for going to Jeri!

As personal cars are not allowed and a lot of the attractions are far away, if you want to see everything you’ll need to book a buggy tour. There are plenty of options, haggling is normal, but most visit the same destinations in varying orders. We paid R$100 each, but it will depend on how many are in your group.

One in the front and 3 on the back, it was once again back out into the dunes and the joys of spinal compression. 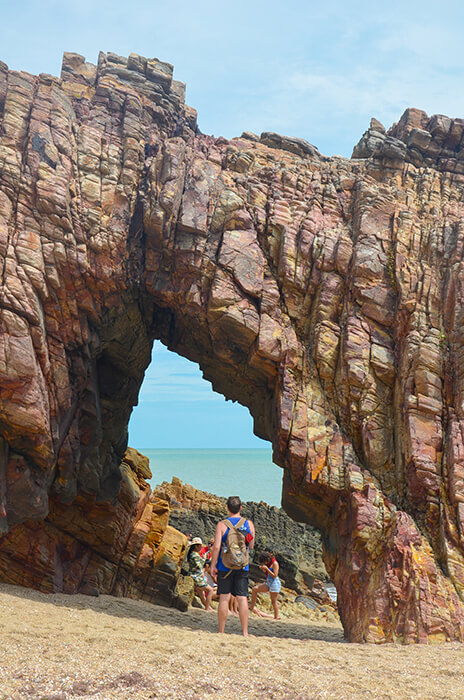 Our first stop was Pedra Furada (Hole Stone). The buggy drops you off on the beach, and then you’ve got a pleasant walk down the beach until you get to the hole. Nature has eroded the rocks over the years to form a very pretty arch. As it’s one of the key tourist locations it can be tricky to get a clean photo. You may need to queue up behind all the pesky bloggers and Instagrammers getting their perfect snap.

Behind Pedra Funda is a short but intense hike, which apparently offers a fine view of the coast… but it was soooooooooooo warm that we passed on that.

The next stop was Arvore da Preguiça (The Lazy Tree). No real deep meaning behind this name… Go home tree! You’re drunk!

Lagoa Azul (Blue Lagoon) was next, and a delightful place to relax and enjoy the afternoon. We had a few hours here, and although the lagoon wasn’t as blue as the name suggests, the water is dreamy. Cool enough to be refreshing from the relentless sun, yet warm, clear and inviting.

The hammocks in the water are a bloggers dream, and surprisingly comfortable! 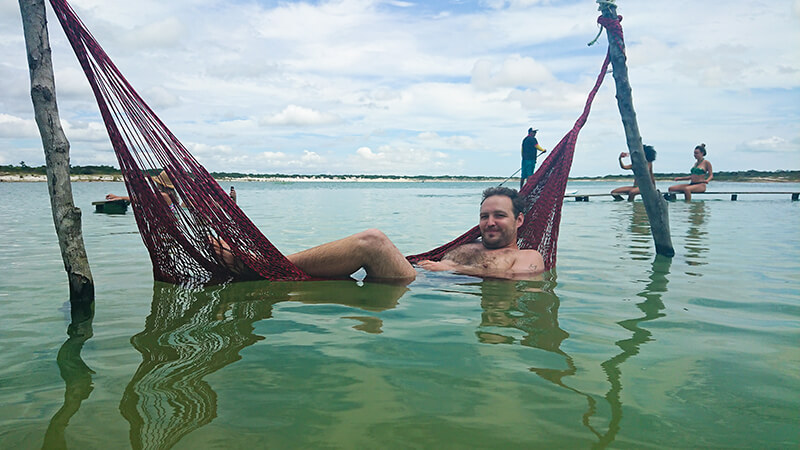 The benches are also a fine resting spot, plus they provide a fine surface to launch yourself from.

Lagoa do Paraiso was our final destination. Our batteries fully charged, it was time to flex our muscles. Again, hammocks in the water are an option, as is a bouncy castle for kids to launch themselves into the deep. We opted for the slower pace of a standup paddleboard and kayak. Buoyed (pun intended) by her previous success Paddleboarding in Itacare, Carol lept onto the board and proceeded to dominate the waves. I was the Kayak King.

With little wind and no waves, you can go full pelt without fear of falling or capsizing. So much fun!

Sunsets are another key reason why you NEED to go to Jeri.

Jericoacoara is one of the few places in Brazil where you can watch the sun setting into the sea (most of the Brazilian beaches face east).  Come sunset, 100s of people rush up to Duna do Por do Sol (Sunset Dune) for the perfect end to the day. Located on the main beach in the Parque das Dunas, it’s definitely worth the trek.

It was a bit cloudy during our visit, but the contrast of black clouds on one side and stunning sunset on the other… magical! The round of applause by the crowd was a little strange, but apparently it’s a tradition. 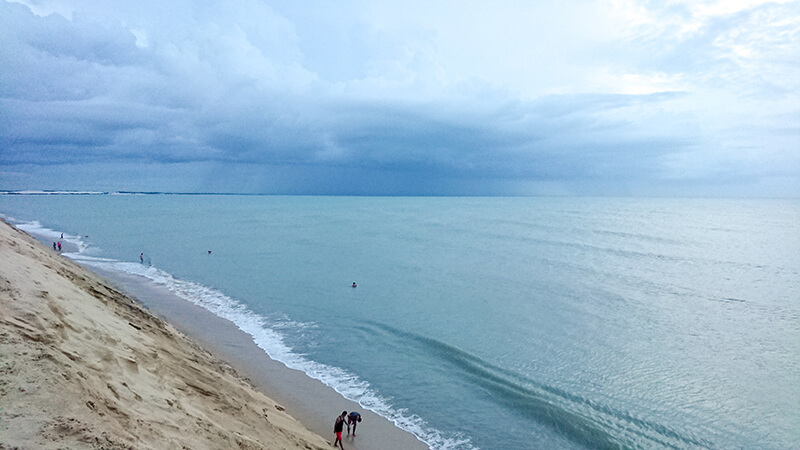 Other places to catch the sunset include Pedra Funda (the holey stone I mentioned earlier). We didn’t have the opportunity, but I imagine you have to use your elbows to get a good spot. The sun in the hole would make an awesome shot.

There are also a few rooftop bars which give you the view, but I’d personally recommend Sunset Dune. After the sunset you can launch yourself down the dunes and into the sea… who wouldn’t want to do that?

If you’re in the north of Brazil, Jericoacoara is an absolute must!
Safe, clean, relaxing… it is easily one of my favourite destinations in Brazil.
Watching the sun melt into the water is a special feeling unlike any other.
Brazil is awesome!!!

I hope you enjoyed the roadtrip series.  The plan was to give you an idea of the size, the variety and incredible sights you’ll see along the way should you choose to explore Brazil. We only scratched the outside, and there’s a complete other world in the interior. I hope we can share that with you too further down the line.

If it inspired you to book a flight, put you off for life or you have any questions about anything I mentioned along the way, I’d love to hear from you. Leave a comment or drop us an email. If we can help, we will.